AI has yet to succumb to the predictions of Hollywood naysayers Stanley Kubrick and James Cameron to cause our undoing as a species. In fact, it seems more likely to actually save lives.

Ukrainian company Sciforce has used its machine learning knowledge in education, retail, banking, publishing, and more. But according to data science expert Igor Shaposhnikov, however, the most powerful application for AI is in the field of healthcare.

Machine learning always requires some hefty kit. That’s where Novatech comes in – using our links with Nvidia to provide Sciforce with the GPUs they need to process massive amounts of important healthcare data.

We sat down with Igor recently to discuss his work with Sciforce and the ever-increasing role of artificial intelligence in healthcare.

Igor Shaposhnikov (he's the one on the right..)

At its core, data science is about statistics and analysing those statistics to you to predict what happens next. As Igor explains: “A computer’s calculation capacity is much better than a human being’s. That’s why computers win at chess.”

When it comes to healthcare, this means there is the potential to take the data for a specific illness and then “train the computer to make decisions and diagnose that illness much faster and with better accuracy than even the best doctors.”

In Igor’s experience, he found that inexperienced doctors might be quick to jump to conclusions when it came to diagnosis. But experienced doctors “always know there are other possibilities to consider.” That’s because they are pulling from their own vast reserves of knowledge – which in itself is really just data.

Igor explains: “If something has happened before and it’s happened many times, that's probably what will happen in the future.”

Sciforce’s first entry into healthcare came eight years ago, when the company was tasked with standardising a range of medical data – compiling automated medical dictionaries so that every illness and medication would be standardised. The system they developed to collect all this data was dubbed ETL (extract, transform, load) and was able to extract raw data, transform it into something actionable.

“At that time, healthcare data was very heterogeneous,” Igor explains. “We started working for this US company, but even in the US the same diagnosis and medicines could have different names. All the data was very diverse.”

“It helped us learn how to work with raw data.”

Check out our AI and deep learning solutions

According to Igor, they were only able to achieve all of this because of the “quality” of the data, which is much greater now than it has been in the past. This means data that’s more relevant and allows those studying it to come to the right conclusions, rather than the more ‘educated guesses’ that might have been the case in years past.

“There is a great potential for AI and data science in healthcare because most of the data is standardised now and of such great quality – thanks to work from companies all over the world, as well as us.” Igor says. “It’s much more standardised than it was ten years ago.”

Simply put, having lots of good quality data is great for machine learning in this sector. It makes it more likely that healthcare systems can be trained to diagnose and even predict illnesses much faster and with better accuracy.

This approach can also help prescribe patients with the right medication. One pharmaceutical company, for example, tasked Sciforce with establishing the potential cause of resistance to epilepsy medication, to finally find out which of the two available medications each patient should be taking. Their system was able to train an algorithm to analyse the data and immediately decipher which drug was suitable for which patient.

Igor said: “With our system, you can achieve a data-derived hypothesis by taking all the data from the drug trials and all your patent data and allowing it to tell us whether or not this drug is suitable for this person.”

Sciforce is also currently working with an Israeli startup which analyses impaired speech. Igor explains: “It’s all about phoneme recognition. We have already developed a speech-to-text engine and then this company approached us asking to develop a system to help people with autism or who had suffered a stroke and had lost the ability to speak properly.”

Sciforce was able to teach the machine to understand what these people were saying and translate that via a tablet so doctors and nurses can understand them. It’s an incredibly impressive idea and while it’s still in the development stages right now, Igor sees a future where this technology could be hooked up to a smart home system so a person with impaired speech will be able to communicate directly with their technology. 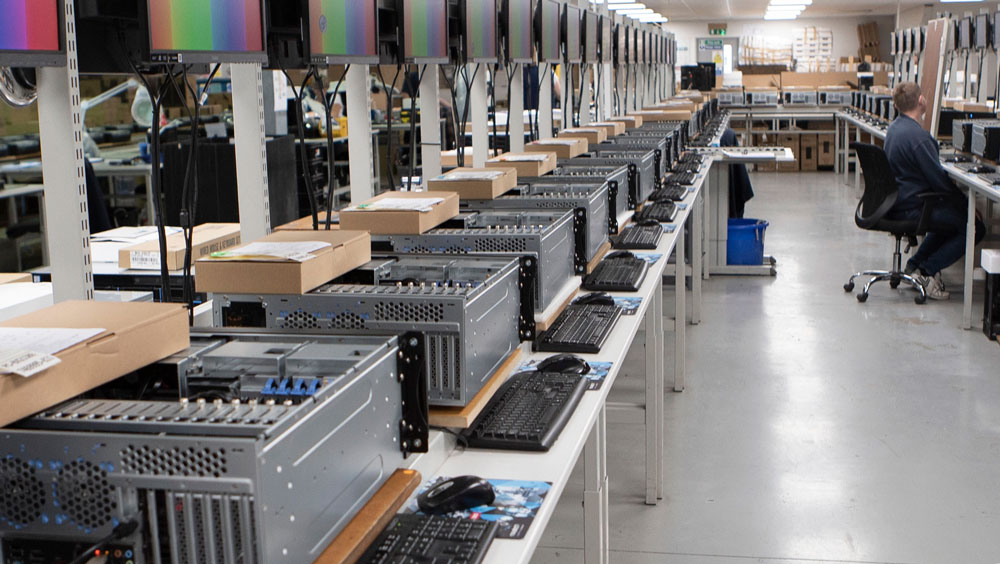 What does Novatech bring to the table?

Of course, such ambitious work requires machines powerful and flexible enough to cut the mustard and run the numbers. Novatech’s Nvidia-embedded systems provided the perfect platform for Igor and his team to train their algorithms.

Igor said: “With Novatech it’s more than just baseline equipment, it’s really powerful, top quality stuff. To train our computers you need really powerful GPU cards and because of Novatech’s links to Nvidia and their Nvidia-embedded systems, they are able to offer us machines powerful enough to train our algorithms without worrying about maxing out the GPU.”

The GPUs Igor’s referring to are cores built specifically for deep learning applications and Novatech were also able to help Igor and the team fine-tune the equipment and integrate it within their existing setups.

It’s honestly quite exciting to see our equipment being used in such a benevolent and world-leading manner and we can’t wait to hear what Igor and Sciforce get up to in the near future. This is the kind of technology that could not only save lives; it could change the world. If that has to happen one step at a time then so-be-it. We’re just honoured to be sharing that step with them.