So, the new AMD Ryzen Threadripper 3990X has 64 cores – but what on earth do you need them for?

Earlier this week, we saw the reveal of AMD’s latest and greatest in consumer-available HEDT CPUs – the Ryzen Threadripper 3990X. With a price-tag of around £3000, this could possibly be one of the most inexpensive CPUs (of its core-count) on the market when it comes to cost per core. But for the average consumer, 64 cores and 128 threads is a mind-boggling boast, and fairly excessive to say the least. So who is this extremely powerful CPU aimed at really?

Well, I think it’s safe to say that this CPU is only, realistically, for consideration by big-time enthusiasts, semi-pros and small independent businesses. Specifically, those using workstations for very particular tasks. If you only ever use your PC for Word and web-browsing, or even gaming, this CPU is not for you – I mean, it could be, but it’d be like buying a Bugatti Veyron just so you can drive from the top of your driveway to your front door: one hell of a flex for sure, but frankly, pointless overkill. Plus you’d never truly experience it for what it is. 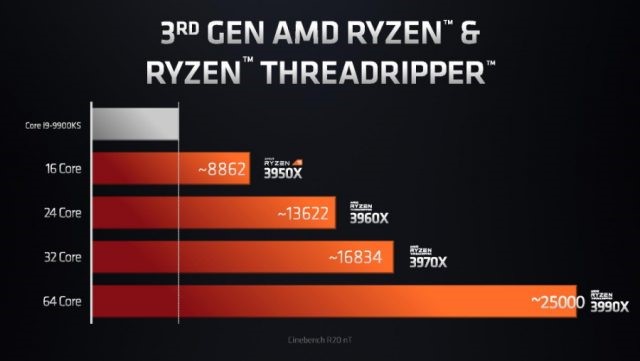 As a frame of reference, the i9-9900KS is considered the peak gaming CPU available – anything more would be of little to no benefit…

What are the practical applications of a 64-core processor?

In short, outside of servers, there aren’t many. And if you’re in the market for a 64-core processor then you probably already know. For anyone who doesn’t though, it’s for those in one of a handful of industries using a particular programme or piece of software – most likely something to do with product design, post-production, simulation or mass data analysis.

On the whole, these areas tend to be reliant on powerful CPUs which can handle the complex logic and calculations required for tasks such as:

Uses in industry include:

Which fields it’s used in:

These processes often make use of multiple cores and multithreading, so in these instances, bigger is often better. That said of course, not all programmes or software are designed for multiple cores, so it’s important to know what you’re working with, and whether or not the programmes or software you are using can take advantage of those extra cores – it’ll be a pricey mistake otherwise…

When looking at processors of this kind of magnitude (and price), it’s definitely worth knowing exactly what it is you need. As mentioned above, there is no one-CPU-fits-all rule, even for the industries where the 3990X is most applicable. In some cases, it may be that you don’t need a CPU this powerful at all.

So is this CPU really for you?

Are the programmes, software and applications you are using CPU intensive, rather than GPU? Can those applications actually make use of multiple cores to begin with? If they are, and you decide that 64 cores is for you, then you’ll need to make sure your RAM is on par too – either 64GB or 128GB. But the chances are, you already knew this. And in that case, you can pick one up here.

What if this CPU isn’t for you?

If it’s not, then it’s probably one of two reasons; either the programmes, software and applications you’re using are not capable of multicore use, and/or they are GPU intensive, rather than CPU. In these scenarios you’ll more likely be looking at CPUs with a lot less cores and higher clock speeds (better for single core tasks), or else graphics cards, such as those from the NVIDIA RTX series, to handle GPU intensive workloads.

Ultimately, the biggest consideration here comes only after you are one hundred percent certain what your requirements are. Then and only then should you be thinking about whether the 64 cores are right for you. If you're still unsure, then take a look at the video below, which might give you a better idea of who exactly this high-end tech is aimed at. And be sure to take a look at our range of hardware if you’re looking for new parts to upgrade your current setup, or if you’re new to building custom workstations – if you’re not sure where to start you can filter by industries and work type too.

What are your thoughts on the new Threadripper 3990X? Is it practical? Have AMD found a niche market? Are you planning to pick one up? Let us know in the comments.