1% of the world’s energy is consumed by data centres - is there a better way?

Data centres are responsible for 1% of all the energy consumed globally. Given that they already contribute around 0.3% of the world’s carbon emissions and researchers say their usage could increase 15 times over by 2030, it’s vital that we find ways to make them more energy efficient.

Novatech recently caught up with Antonio Barbalace, a Senior Lecturer at the University of Edinburgh, who is researching how system software can be used to increase data centre performance and energy efficiency.

“Data centres are at the heart of the cloud,” Antonio says. The massive increase in cloud computing has led to exponential growth in demand for data centre processing. “Most if not all cloud data centres are based on x86 servers (Intel and AMD nowadays). While certainly performant, they’re not that energy efficient.”

Antonio’s requirements were a bit more esoteric than those of the average Novatech customer. He was looking for ARM and PowerPC as well as x86 servers! But we were still able to help him track down the hardware that he needed at a good price.

To date, we’ve helped Antonio purchase and implement a system that includes the following hardware:

Read on for more about his fascinating work.

x86 and ARM are the two most common CPU architectures in the computer market. There are plenty of differences between the two, but you could practically sum them up by saying that x86 is famous for its performance and ARM is famous for its energy efficiency.

In simple terms, ARM is focused on processing instructions which are as simple as possible. However, this simplicity means that more instructions are required to complete a task, so things take longer.

By way of comparison, an Intel Core i7 (x86) can require as much as 130W of power, while ARM mobile processors consume as few as several Watts. Similarly, for the same power consumption, data center ARM processors host way more CPU cores than x86.

“When looking at the software, the two are fundamentally different,” Antonio says. “At the moment, software that’s been built for x86 processors cannot run on ARM and vice versa. Even more importantly for my research, software running on ARM cannot be moved to x86 while it is running.”

Why is this a problem?

Data centres typically run on x86 CPUs, which are ideal for the high throughput required during peak demand. At other times – during the night, for example – keeping these systems running, even whilst under minimal load, still consumes a lot of power. But if data centres could run on other architectures, they could use a lot less power.

“It’s likely that edge data centres are going to be populated not only by x86 servers but also servers based on other CPU architectures, including ARM.”

Edge computing is a distributed form of cloud computing where the data centres are built closer to users than they were in the past. The data doesn’t have to travel as far, which improves response time and bandwidth.

“The reason ARM is so interesting is because edge data centres tend to be smaller and used in environments where less energy is available. But that doesn’t stop other Edge data centres being built with x86, when such constraints don’t apply. In Edge, when a user moves between locations, they will connect to different data centres nearby -- to keep the response time low. This requires software migration that usually only works between systems that are homogenous. My work will enable software migration across different CPU architectures, such as x86 and ARM.”

The end goal is for software services to be able to move seamlessly between CPUs with different architectures, meaning that users would be able to switch between edge data centres without disruption as they move around.

The same technology can be used also in a single data center (Cloud or Edge) when servers of different CPU architectures are in use. In this case to reduce energy/power consumption. This means that servers with x86 processors, which are more powerful but less energy-efficient, would only be switched on when needed instead of being used all the time.

How did we help? 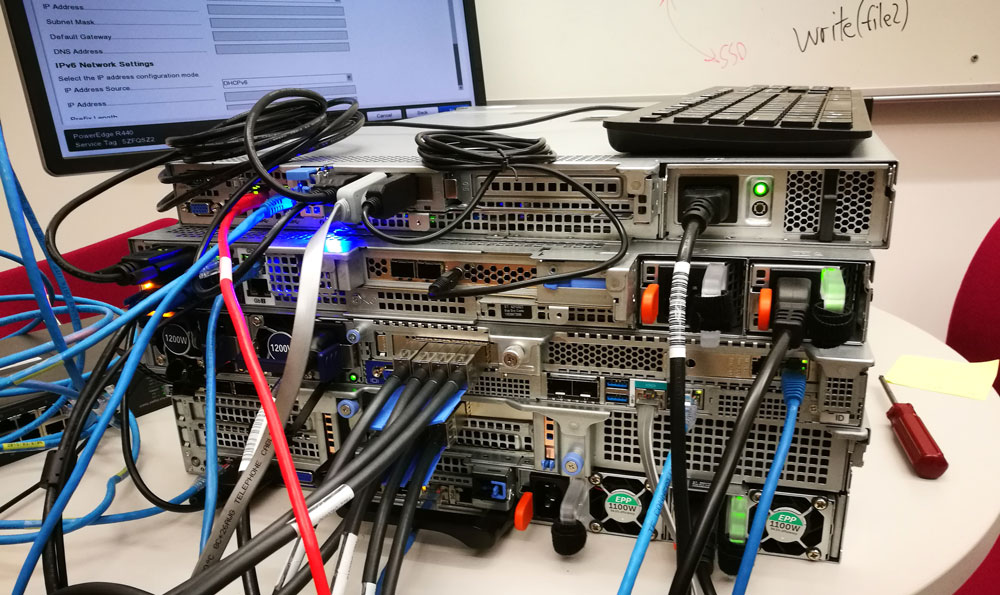 Just some of the hardware that Novatech have supplied

“Novatech were able to help me find the specific equipment I was looking for,” Antonio told us. “I spoke to Daryl, told him what I was hoping to achieve and he provided a few different quotes to choose from.”

We also caught up with Daryl to learn a bit more about his work tracking down Antonio’s equipment.

“One of the interesting things about Novatech as a business is that we’ll help your average gamer who just wants something that they can play Call of Duty on. But we also do pretty technical stuff, including research like Antonio’s. “

“Sometimes we have to look pretty hard to find the things our customers want. But we have great relationships with a lot of different suppliers, so we’re able to find most things and get them at a good price.”

Thanks to Antonio for taking the time to share his research with us. You can learn more about his project on these websites:

To find out more about our specialist support, get in touch via the form below, or take a look at our customisable servers.