×
Home Education Closing the gap: The reality of device management in schools

Closing the gap: The reality of device management in schools

With the world of technology moving faster every year (even faster this last year as a result of the pandemic), educational establishments are under immense pressure to keep up. The trials of the last 12 months have revealed just how far behind some schools are with their technology, and if things don't change soon, thousands of children could be potentially missing out and falling behind on their education.

According to Wayne Norrie, head of an academy trust with schools in disadvantaged areas: "60% to 70% of children in our schools don't have access to laptops." The scale of this digital divide and the depth of tech poverty afflicting schools across the UK has led to various campaigns to close the digital divide. One such campaign is our very own 1:1 scheme. This is a scheme that allows schools to purchase devices on a lease with the financial backing of parents, who make regular contributions towards the overall cost.

To discuss our 1:1 scheme in greater detail, how they coped during the pandemic, and how things have changed now that children have started returning to the classroom, we spoke to two school governors from two very different schools. 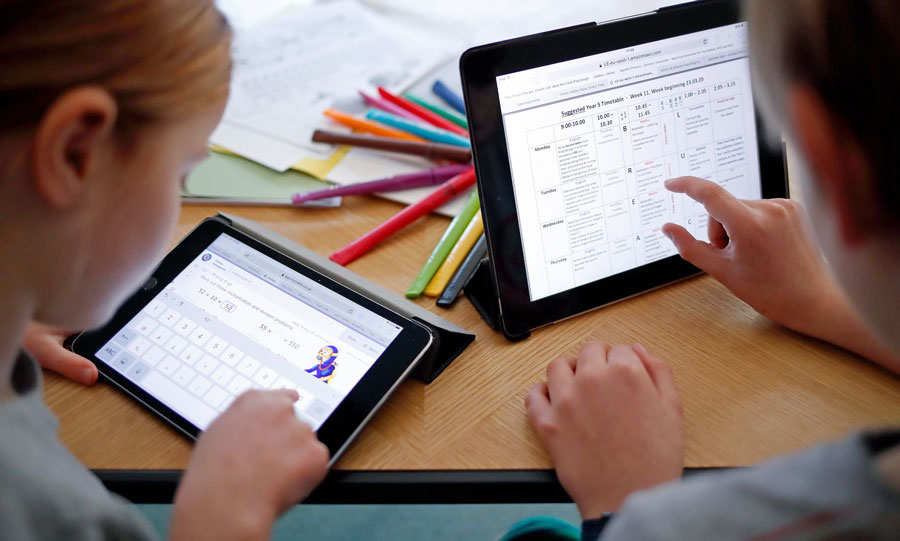 Helping students access the technology they need at home, and in the classroom

Jerry is a governor at a small junior school in a wealthy area with three-form entry. This means it's made up of four classes of around 90 kids; 360 in total. During the pandemic, Jerry and his team of governors worked hard to ensure that students were able to learn from home.

Initially working with a bank of about 30 laptops, all of which were approaching four years old and were limited to one class at a time, it quickly became apparent that this was inadequate for their school's needs. However, the government scheme to end tech poverty in schools bought them 32 brand new Google Chromebooks, which was quite handy given that they were already using Google Classroom, as was the secondary school they are affiliated with.

Jerry said: "We use Google Classrooms, and we had really high engagement rates right from the start, which I think is a testament to how many devices households have these days. There were some, however, that were not lucky enough to have a device at home. So, for these kids, we lent them a Chromebook or a laptop, and the staff checked in to ensure they were getting what they wanted out of it."

Jerry says they are looking to buy even more Chromebooks in the near future, hoping to take the total to 64 Chromebooks, plus the 30 older laptops, which will potentially mean a laptop for every child in a single class. Eventually, however, they hope to move to a complete Chromebook solution, because the ease and familiarity of the ecosystem (remember, many of these children will have grown up with Android tablets and smartphones) means they engage more with the Chromebooks than with traditional laptops. Ultimately, it's also always about the quality of the device rather than the quantity.

"We found that the children engage much better with Chromebooks," Jerry says, "so, we're in the process of filtering out the laptops. We've got two batches of 32 Chromebooks now but the expense is quite profound given that you've not just got to buy the laptops but the charging bank trollies and all the storage as well."

A comprehensive guide to future-proofing schools

Now that children are returning to the classroom, the move towards digital learning catalysed by the pandemic appears to have had a lasting impact on how lessons are taught and homework is set.

Jerry explains: "All homework before was set by paper and now it's set on Google Classrooms, so the children can upload their homework and interact directly with us. The results of working that way have been wonderful, as children today are so much more invested in technology - there's been a massive engagement. In fact, I was talking just the other day to a little boy in year four who said he wanted to be a coder when he grew up. This is the world we're living in now and I think it's important to nurture those kinds of interests."

Of course, to nurture those interests properly you need access to devices, and in Jerry's case, as they are a smaller school in a more affluent area, they were in the position to be able to buy many of the devices they needed outright. Families in the area also often have plenty of devices to share at home too and as it's a primary school, children don't often need their own.

Where the 1:1 scheme is really beneficial, however, is for year 6 students looking ahead to secondary school. Because of the wider use of Chromebooks and the Google Classroom ecosystem at secondary school, getting kids used to it in year six means they'll be able to hit the ground running when they move on. And if you give them the device at the start of year six, they should have paid it off by the time they've reached the end of the school year.

Gordon is a governor at a large secondary school in an underprivileged area. It's a night and day difference to Jerry's school, with around 900 pupils aged between 11 and 16. As a governor, he explains his role as being more "strategy" than "operational," because he's there to see the big picture and drive the big decisions.

"It's our job to make sure the school is delivering education to the kids, and during the pandemic, when everything went remote, it complicated things a thousandfold," Gordon says.

Gordon has a strong background in technology so was well-placed to help the school solve its digital device woes. However, he argues that we might be looking at the wrong problem.

"A lot of people think that just by giving kids a laptop or smart device it will fix the problem. But a lot of children at our school simply don't have the right environment to work undisturbed at home, even if they have been given devices."

From September, of course, all kids will be back in the classroom and free of their bubbles, so matters are bound to be complicated even further and it's more important than ever before that every child at least has access to a device, particularly with the rise in blended learning.

Getting back to the new normal

The government scheme to put more tech in the hands of the kids that need it has certainly benefited Gordon's school. However, it's a scheme that certainly has its limits, particularly in households where there's more than one child. There's also the sad fact that there are many households where, if a device was to be sent home with a child, it might be used for other purposes and not be easily available for the child who received it.

It's a tricky and delicate situation but the 1:1 scheme could represent a solid opportunity for his school, with a few tweaks here and there. Because, whilst many parents are able to contribute to the small monthly payments, there are options in place that allow schools to balance payments. So, in cases of hardship, parents who can't afford it can pay less or even nothing at all.

Of course, there's always the chance that parents might not buy into this but there is still a lot to be learnt from both sides, and changes that can be made to ensure the scheme is closing, rather than inadvertently helping to widen the tech poverty divide.

Our support and services for schools

In an ideal world

The government devices that were sent out might technically work but some of them are outdated. For example, Gordon says that the kids at his school rely on Microsoft Teams but many of the devices provided by the government scheme are not powerful enough to run Teams. And then there's the other more fundamental problem to consider.

"Even if you waved a magic wand and gave everyone at the school a top-of-the-range device tomorrow, that doesn't guarantee they'll have the connectivity to log in from home or be able to realistically do the work there," Gordon says.

You also need a device that is going to be robust enough to last all day on a single charge, and be potentially used as a goalpost by the kids at lunchtime.

It is a quandary without an easy answer and while the 1:1 scheme provides a wonderful opportunity for many schools that fall somewhere between Jerry's and Gordon's, it might need to be looked at a little more carefully if it's going to find a space at less privileged educational establishments.

From talking to both of our governors it would appear the tech poverty issue is not much of an issue at all to some, but is actually quite crippling to others.

For those that can access the internet easily from home, there are thousands of resources online that children of all ages can use to help fill in the knowledge gaps they might have acquired over the course of the pandemic. But, as we heard from Gordon, not all parents are able to afford the monthly sum to cover the cost of a device.

Thankfully, we appear to be moving back to a state of relative normality right now and our kids should all be back at school 100% of the time come September. But the pandemic has taught us some valuable lessons when it comes to the digital divide and just how wide it is. If we want to stand any chance of closing it, we're going to need more ideas like the 1:1 scheme, and more school governors like Jerry and Gordon to help us pull it together.

Find out more about our 1:1 scheme and how it could solve your device management problems by getting in touch today.