×
Home Gaming and esports What to expect from Dying Light 2

What to expect from Dying Light 2

After its initial success in the over-populated zombie apocalypse genre, Dying Light treated fans to a captivating trailer showcasing its sequel Dying Light 2 at Microsoft’s E3 2019 event. The zombie epidemic continues, as players will now be able to practice their parkour skills in a new city away from the landscapes of Harran. The new map is set in an environment that can only be compared to a ‘modern dark age,’ as players are set to experience a city full of undead, where the last of a living civilisation is now broken and lawless. So, what should we expect to see from the highly anticipated sequel? Well, there’s a fair bit, so here’s everything you need to know about Dying Light 2 ahead of its launch.

First and foremost, when will it be released? Well, no one knows - not anymore. Following a recent update from Techland, it was said that the spring timeframe has been completely scrapped, so there won't be any exact dates for the foreseeable future - a shame to be sure, but personally, I think it's probably for the best. I'd much rather see a well-polished and complete product and launch, rather than one full of bugs and broken gameplay. 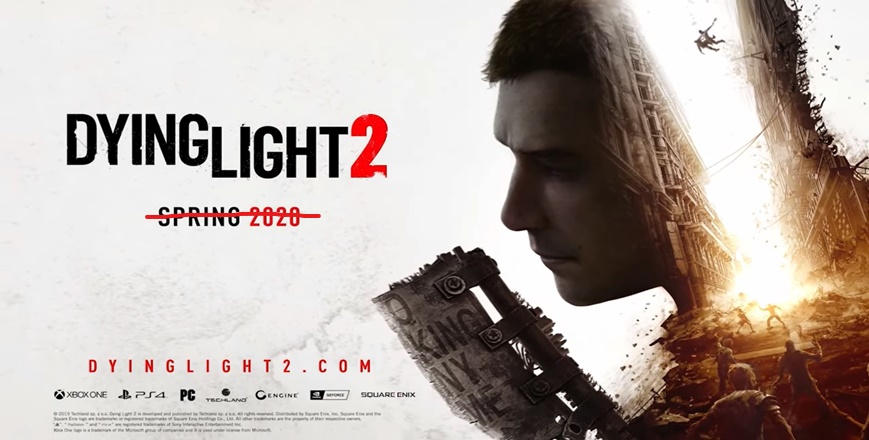 If you have around half an hour spare in your day, then here is an official release of a 26-minute gameplay demo from Dying Light 2 in shiny 4K. In the footage you’ll follow an entire in-game mission and find out how your choices shape the narrative and the city itself.

For those of you that don’t know, Chris Avellone is somewhat of a cult hero to those that enjoy RPG games. Known for his contributions to games like Fallout 2 and Fallout: New Vegas, Kontor 2, and Star Wars: Knights of the Old Republic II, these games are considered amongst the elite and are vastly admired within their franchises as well as the RPG genre as a whole. Chris has helped to evolve the story that we will see in Dying Light 2 by introducing a new narrative - gameplay that is orientated and affected by your in-game choices, choices that help reshape the environment around you as you play. This will see Chris’ expertise melded into an open world action universe, specifically, one centred around a zombie apocalypse, for the first time. To say that fans are incredibly excited would be an understatement. I think we’re all eagerly waiting to see how Chris’ input can lift Dying Light 2 above and beyond its already impressive predecessor.

Still yet to be named, the new map will be absolutely colossal. Dying Light 2’s Lead Developer, Tymon Smektala, announced at E3 2018 that the map players will experience in Dying Light 2 is ‘four times as big as all of the maps from Dying Light combined.’ Considering there were 3 maps available in Dying Light, with the third DLC map being twice the size of the original maps, eager fans were quick to calculate that this would mean walking the new map from one side to the other could take as long as two hours!

To create a fully immersive experience for PC players, Techland are looking to fully evolve the visual experience players will witness in Dying Light 2 by partnering with Nvidia and including cutting-edge real-time ray tracing. ‘RTX has allowed us to push the visual boundaries of Dying Light 2. Being an open world game set in a world of the infected, it’s important for us to really create as realistic an experience as possible,’ said Pawel Rohleder, Techland’s Chief Technical Officer. 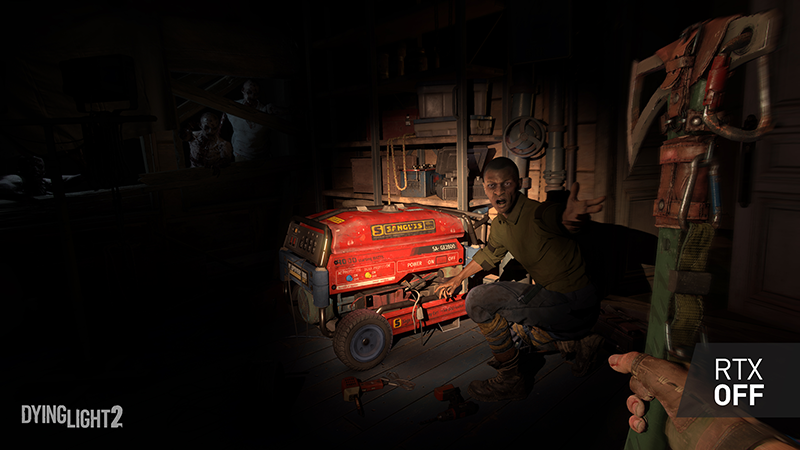 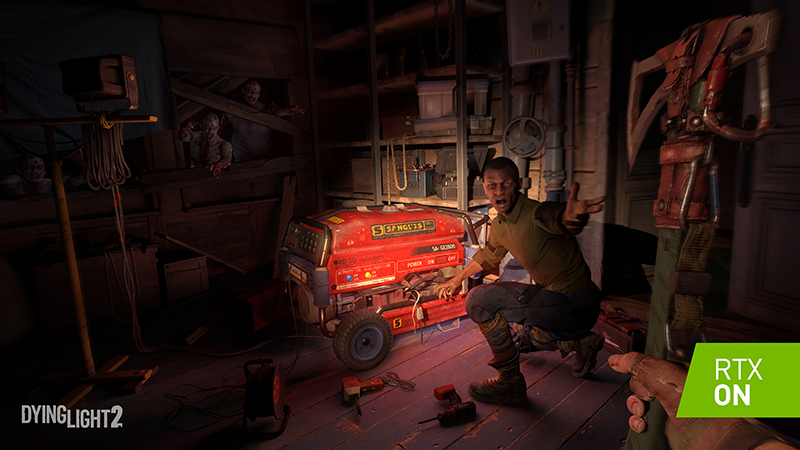 The above screenshots from Nvidia showcase the difference RTX makes to the visuals. Whilst the ‘how’ of using RTX has not yet been confirmed by Nvidia or Techland, the images suggest some kind of global illumination or bounce lighting – comparing the two images you’ll notice how the scene is not only better lit, but how the light ‘bounces’ off of the red generator, providing a subtle red tint to the environment.

Combat during a zombie apocalypse is of course a major element to survival in the Dying Light franchise. However, players will realise that there have been modifications made to the NPC’s and the combat style in Dying Light 2. Don’t fear, slicing and bashing zombies is still as enjoyable as it was in Dying Light, however due to the threat now posed by rival factions, combat situations will become more tactful and complex. In the trailer we see the use of a rubbish bin to distract a threat before he is pushed off the edge of the cliff. Players will be able to utilise the environment around them to aid their combat situations with both the living and the dead.

Players will also have to improvise the weapons which they use when they fight and will be able to craft their own make-shift swords and machetes throughout the story to help them escape sticky situations. During the gameplay showcase at E3 2019, we see an improvised hatchet-like weapon seemingly fashioned from a sharpened road sign. This could suggest a huge element of creativity for players to utilise when creating weapons and on release could possibly see a great zombie kill of the week (I’m sorry, I had too…)

As revealed in the trailer for Dying Light 2, the main protagonist of the game is revealed to be infected. In an interview at E3 2019, Marc Albinet, Game Director for Dying Light 2, revealed that spending too long within the Dark Zones, or outside at night, will have a negative impact upon the player’s health due to his being infected. ‘As soon as you’re infected and you go [out] in the dark… you need to be under a UV light to stay – I’m going to say – ‘normal.’’ Albinet went on to explain that doing otherwise would cause ‘your level of infection [to] rise’ and that an increasingly higher infection level will directly correlate with the player’s performance in terms of speed, power, and stamina. However, if you reach a certain level then you will transition into a zombie. During the interview Albinet made it unclear as to whether this would mean game over or not.

As players will be accustomed to, the undead become more active in the night or the darkest areas of the world space, safe from UV rays. 15 years after the initial outbreak this is still the case. But where do all of the undead go when it's daytime and they don’t want to be rendered near useless? Well, they group together in dark areas of abandoned buildings all across the city (not dissimilarly to a certain film featuring Will Smith…) These areas, called Dark Zones, are suggested to contain special objects and goodies, though they just might come at the ultimate price.

Dying Light 2 has all the elements it needs to become one of the stand-out games of its genre. With plenty enough talent working on this project, we are sure the campaign will be more than worth the wait. Only time will tell whether it stands to be even better than its predecessor, but with all that we know thus far, we’re feeling pretty confident that it’ll knock it out of the park.

What are you most looking forward to in Dying Light 2? Let us know in the comments. And be sure to bookmark this article and keep up-to-date – we’ll be adding more information as we find it!