As I have mentioned in a previous article, the consumer technology landscape is an unpredictable terrain to roam through. Even more so when your simple gaming utility is being adapted for crypto-mining, sending the prices of GPU sales globally booming to unprecedented prices.

GPU sales sky-rocked in 2017, leading to a temporary hardware drought. While conventionally sold for advanced Gaming PCs, graphics cards are being utilised by crypto-miners for increasing the speed of mining their virtual crypto-currencies from online networks. Evidently, eager miners have been scooping up the best brand GPU’s in large volumes to run side-by-side in a bid to extend their crypto-currency mining profits.

At the start of 2018, crypto-currency interest has been seemingly larger than ever before. Another drought has swallowed up the GPU market, leading to some graphics card producers limiting the very sale of how many may be purchased by a single individual. This is bad news for gamers and is being viewed as one of the rockiest times to purchase or upgrade your Gaming PC. 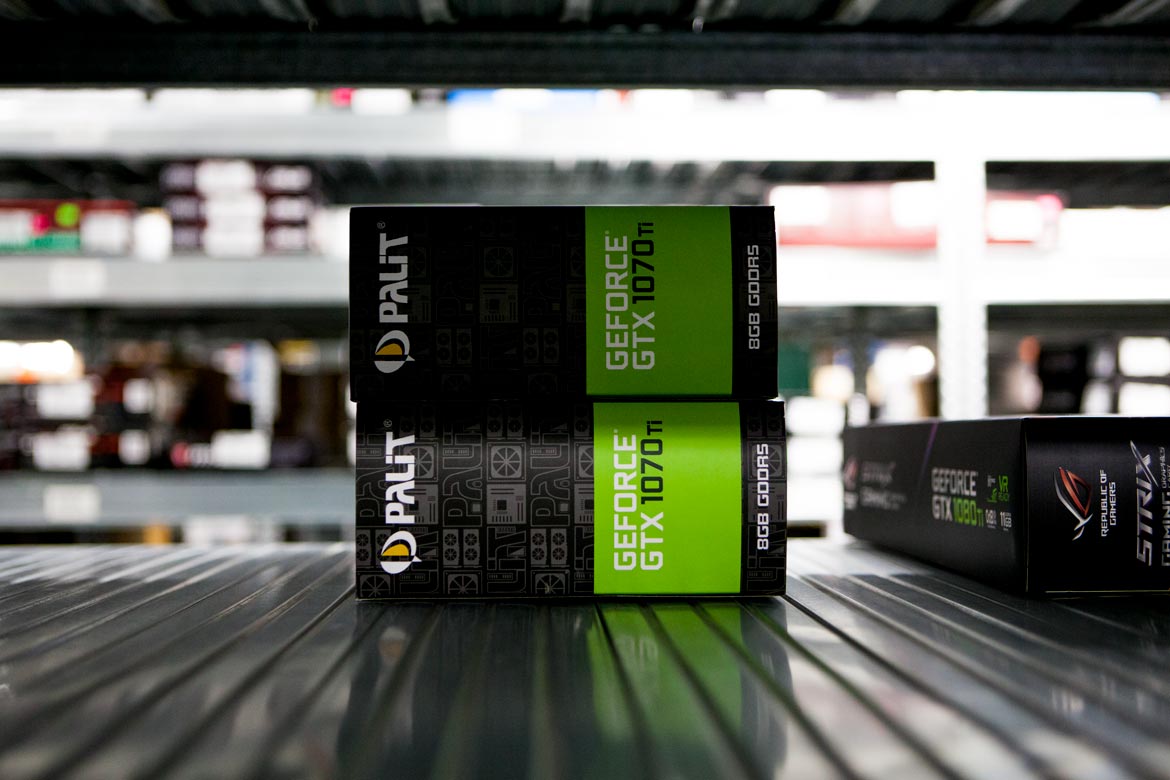 Over the last weeks, Bitcoin has seen a bipolar rate of success and value, peaking record values and then plummeting down into the depths of negative profit. This current trend has sparked huge interest with the general public in crypto-currencies that has seen the unusual crowds investing hardware and funds into various currencies, hoping to strike big. This is also a reason that GPU sales have been so rife and corrupt.

Where high-end cards often use substantial power, mid-range GPU’s are generally seen as the most profitable investment for crypto-miners for their less demanding operations that help pool crypto-currency investment.

This has led to the mid-tier graphics cards commanding the higher prices, crippling gamers hopes of upgrading their Gaming PC’s and systems.

I ordered on the 22nd December. I'm running out on setting up the gaming competition. do you still have no idea when you are getting any stock?

As long as shops like you limit sales to 1 card per person and keep prices within 10% of launch and sell on preorder at the right prices then you are not part of the problem.

I'd been searching for a GPU that was actually in stock and a reasonable price for a while because of the surge of GPUs being hoarded for mining Ethereum, so miners are largely to blame for my build being finished about a year late. But I managed to get lucky and snatch a 980 Ti from here for about £280, really hit the jackpot. I hope anyone else trying to upgrade or build a new PC manages to find the card for them at a relatively normal price, but I'd personally advise to hold off on anything until the prices go back down.

Need some inspiration? Here’s what some of our working from home and gaming set-ups look like at Novatech

From dedicated offices to working come gaming set-ups, we decided we would share what some of our set-ups look like.

With a brief reprieve from product releases, now's the perfect time to review some of the best CPUs and GPUs...

The arrival of the B550 motherboards has caused somewhat of a broad discussion in the online tech community as to whether these mobos will in fact be the direct replacement for our beloved B450 boards. From a generational standpoint, they are the direct equivalent of the B450 but the biggest problem with the new B550 boards comes from their strange situation in the current motherboard market...