23rd of March - write it down now. It's just around the corner, and that means before long, the Combine will be too. 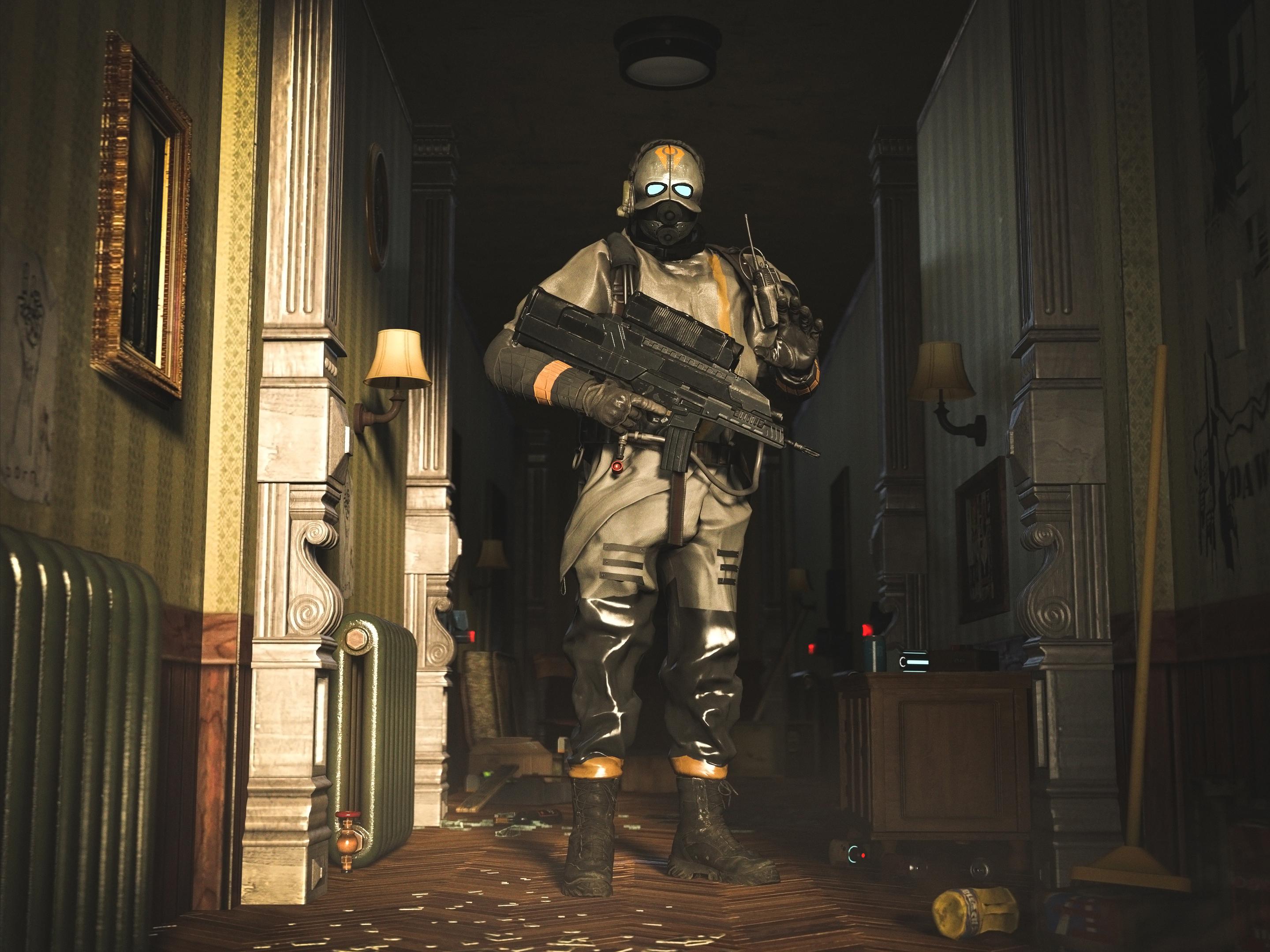 I've no doubt most everyone knows this already, but Half-Life: Alyx is very much on its way. It's highly anticipated and for all the right reasons.

Aside from the 1+2 debate which has been raging across forums and YouTube pretty much since the game was announced, I think I speak for everyone when I say this is an extremely exciting development from the seemingly dormant series.

With its release less than a week away, we thought we'd give a quick rundown of everything we know, in readiness for the game's debut drop on Monday next week.

What we can expect from the gameplay

If you've not seen any of the gameplay videos yet, they are definitely worth the watch. But if you don't have time, then here's an overview of what to expect from the experience.

First off, and possibly the most controversial area of the whole affair, is the fact that the game will be a VR exclusive. This may not be of surprise to some people, but could well be for others - either way, many have been disgruntled by Valve's decision to keep the title limited to the virtual reality world.

However, despite creating their own hardware specially for Half-Life: Alyx (the Valve Index), it won't have any exclusive gameplay features, specifically for their hardware. Although you may get the smoothest experience in terms of the Index having the latest hardware/software in VR set-ups, you'll gain no advantage in having an Index over other VR platforms. Valve have said on several occasions that they wanted as many people to experience Alyx as possible, and have made sure that the game was designed to work for any VR user on any VR platform.

But all of that aside, I think this is pretty huge news for the VR scene on the whole. Valve have historically strived to be creative leaders in their fields, and with basically no budget, thanks to their Steam distribution platform, if anyone has the knowledge, creativity and money to revolutionise how the VR field develops, it's Valve.

But how does this affect Half-Life: Alyx in (virtual) reality? Well, quite simply, the entire game is seamlessly designed for VR, rather than around the 'gimmick' of VR, which we often see with other games and ports. Valve have said themselves that the game was built for VR from the ground up, using their brand-new Source 2 engine. What this translates to in terms of gameplay, is an experience unlike any other on VR platforms to date. It will essentially be the first true AAA VR experience, meaning Alyx will be refined in a way that existing VR developers just do not have the budget or resources to achieve in current titles.

Somewhat ironically, one of the simplest examples of how Alyx will differ from other VR titles, is the sheer amount of interactivity, or rather, purposeful interactivity; almost any item in the game appears to be pick-up-able, physics-based, and ready to be weaponised or used as a distraction, or even, in the case of the occasional construction hats you find, a way to avoid a ceiling-based death... but more on that later. This adds a layer of depth to the game which you just can't guarantee to find in other VR titles, which might offer the interactivity, but fail to give incentive to do so out of anything other than curiosity. In Alyx, it seems as though Valve have tried to give players a reason to want to pick up that thing, or push this one aside, whether it be that basic curiosity that comes as standard in VR, or in order to scrounge for more precious ammunition, a means to activate an objective or to find the missing component for a nearby health station.

A harsh and beautiful virtual reality

As you'll notice from the various screenshots and gameplay footage around, graphically, Half-Life: Alyx looks absolutely stunning. The detail is rich and crisp, the atmosphere and level design harmoniously create a gorgeous yet terrifying world, perfectly capturing the feel and ambience of that surreal desertedness of a city post-alien-invasion and pre-occupation; it's a deeply immersive setting for a deeply immersive overall experience. This looks like a game you'll get lost in for hours on end as you traverse the dilapidated streets, dodge combine patrols or face them head on in a heated, heart-pounding stand-off. With the recent advancements on the VR scene, plus new hardware with the likes of Valve's own new platform, this game is set to be a real visual treat.

On a related note, and among other things, the level-design plays heavily into Valve's attempt to make the game as accessible as possible. Game areas are generally tight, claustrophobic settings, or small open areas filled with props and set pieces. Combined with multiple choices for in-game movement, consisting of standard VR 'blink' teleportation, a sort of 'dash' teleport, and joystick-based linear movement, players are able to move through the world in their own way and at their own pace. You'll also be able to play the game standing or sitting, in small spaces or large, or even room-scale, whichever way best meets your own individual needs. And all whilst maintaining a consistent, atmospheric setting, true to the Half-Life universe. If you ask me, it's exactly the kind of thing players will want when it comes to exploring all of this... 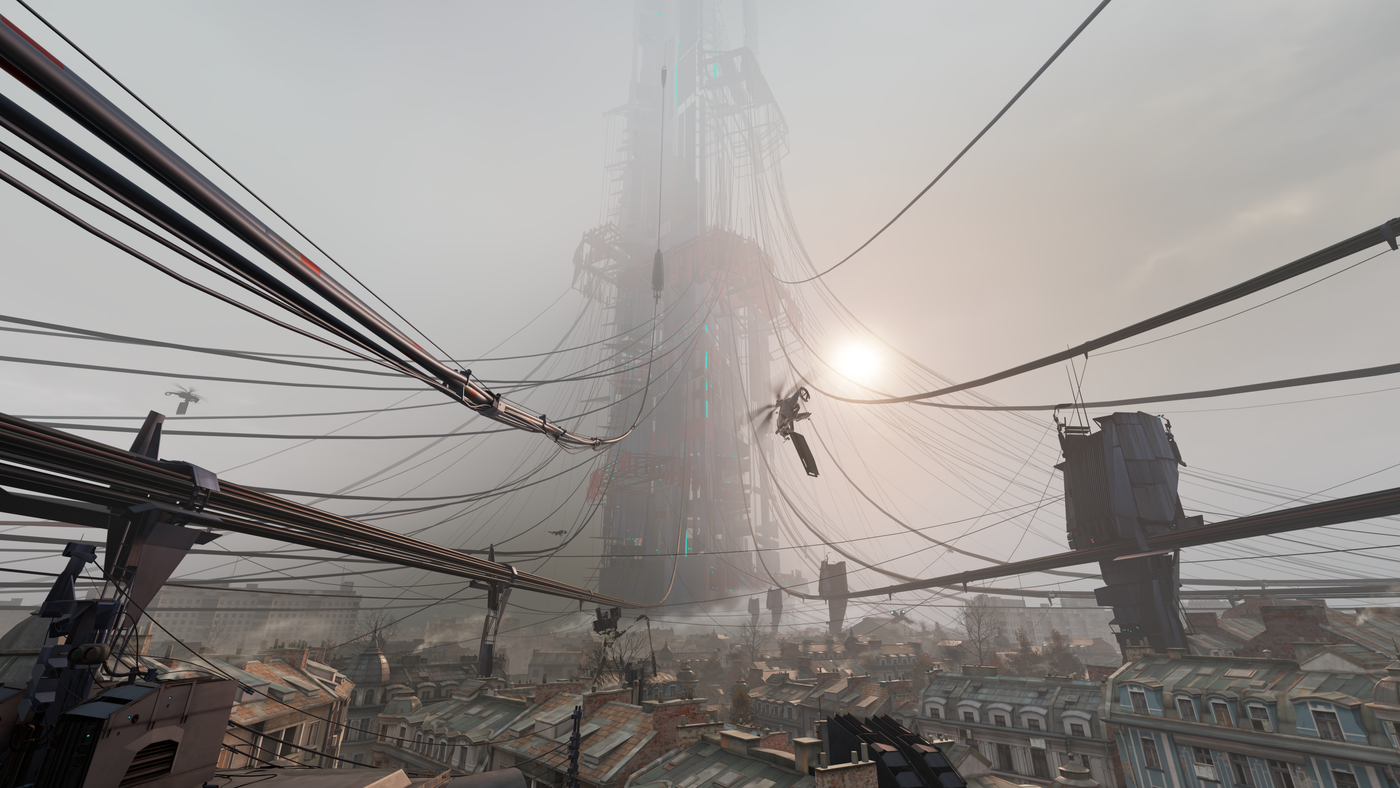 The game mechanics will be heavily rooted in an intuitive 'look, pull, grab' system using the appropriately named Gravity Gloves, also known in-game as Russels (after the New Zealand chap that created them). From what we've seen so far, players can essentially look to the item they want to pick up, and with a quick flick of the wrist, almost reverse 'force throw' the item towards themselves, which they can then snatch out of the air. It sounds potentially finicky at first, but take a look at Adam, from Adam Savage's Tested, below:

Pretty swish right? It gets even cooler when you start using those gas canisters to blow up Headcrab Zombies in style...

It would also seem that the UI is handily (pun-intended) integrated into the gloves, with a trio of hearts indicating player condition, a display for tracking ammunition whilst you have your weapon equipped, and a small blue ball and counter, indicating how much Resin (a kind of upgrade currency) is in Alyx's inventory. It's also been confirmed in a number of Valve's demos and interviews that the player will be able to store two items in slots on their wrists, almost akin to something like quick-slots or secondaries, whilst the likes of ammunition and resin will be kept 'over the shoulder,' as though players have a small backpack to store their inventory. 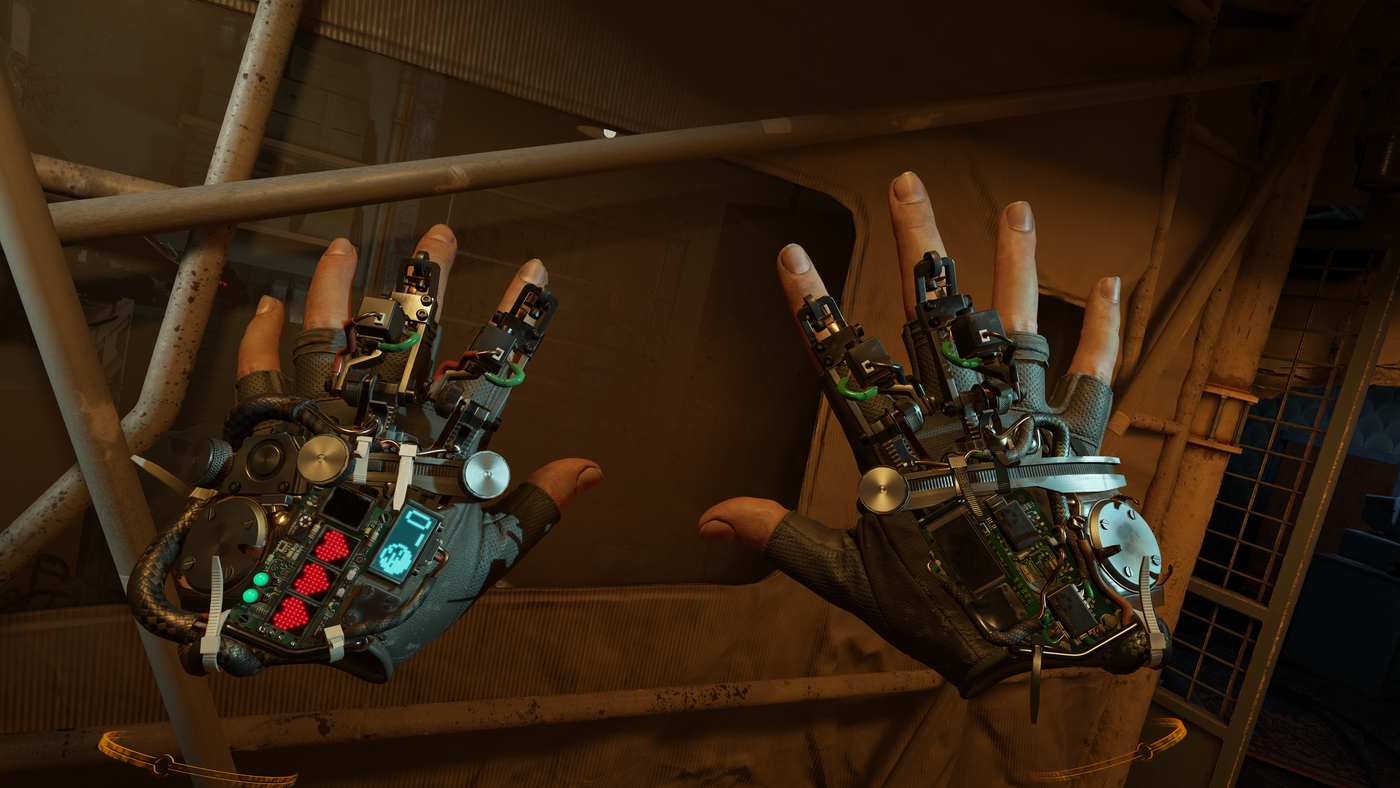 For those paying attention, you might have picked up on the aside about the so-called Resin. Yes, you will be able to collect this Resin, and spend it at Combine Fabrication Stations to add upgrades to your weapons. We're not sure how many different weapons will be in the game yet (currently only two have been showcased: the pistol which you start the game with, and a kind of futuristic one-handed sawn-off shotgun), but we have seen that the pistol has a choice of 4 upgrades, so it seems fair to assume that this will be the case for each weapon. So even if there's only 4 weapons total in the game, that's still 16 potential upgrades to choose from, each with their own unique benefit to how you play.

And when I say unique benefit, I mean quite unique indeed. Take for example, the reflex sight seen in demos and trailers - although it functions to give you a cross-hair and therefore increase your accuracy, it also has the ability to highlight enemy weak spots...

That's right, it would seem certain enemies have weaknesses you can exploit, in order to reduce the time and ammunition you would normally use, and in some cases, giving you the option to one-shot-kill enemies outright. Whether or not this will be true of all enemies remains to be seen, but have a look at the clips below, where we see both the reflex sight in action, and the exploitation of some sensitive areas on a Headcrab Zombie and Combine Soldier.

As far as enemy types go, there's not a huge amount of info, but we have seen a myriad of Headcrabs, Headcrab Zombies, Combine Soldiers (both basic and possibly a 'Heavy' type), as well as those sneaky ceiling-dwelling snatchers, fondly known as Barnacles. 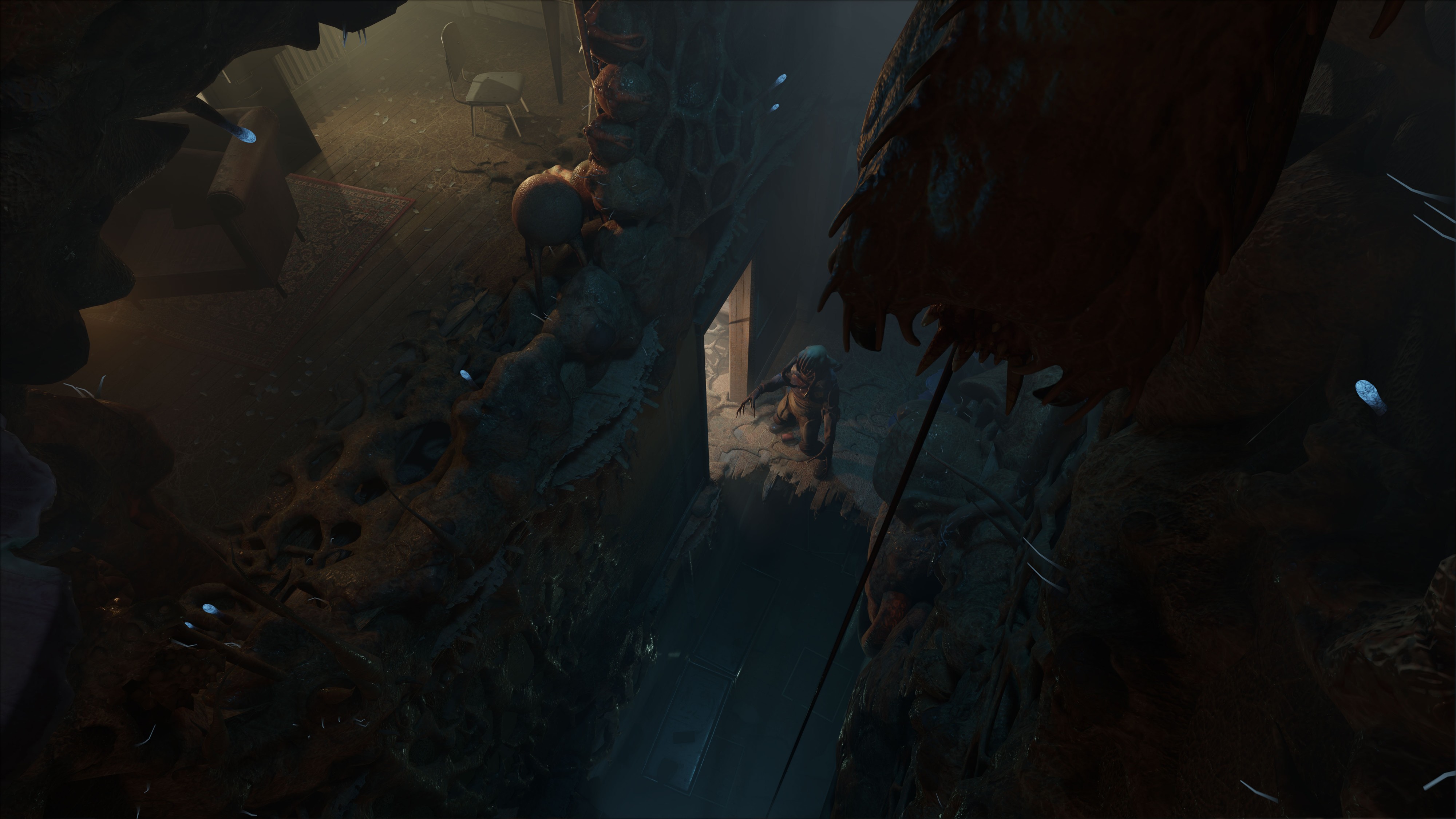 Of course, with all these guns and enemies around, it's almost certain you'll take a beating or two at some point in the game - why else would you have the three little hearts on your glove? Which leads us to our next point...

As you'll see in the clip, in order to make health stations work, you'll first have to acquire one of these little guys in a jar... and then watch them smooshed into a neon green juice, before placing your hand into the station for some relaxing acupuncture. Seems legit, I guess?

A word on system requirements

Now, of course, a VR set-up will be needed to play this title, but what kind of hardware will you need in your PC to run it? Well, according to the Steam page, the minimum requirements are as follows:

I'll be honest, to me this seems like quite the low-ball in terms of requirements, and whilst I've no doubt Valve have tested and confirmed this, I'm willing to bet that frame rates and graphical fidelity will probably be suffering here. By no means are these 'cruddy' requirements either, they'd make short work of most mainstream non-VR titles, and even some existing VR titles too, but if you're hoping to have your experience look and run like the trailers and demos, you'll be wanting something a tad higher-end. There are no recommended specs as of yet, but based on these minimums, and from what we've seen the game is actually capable of, we think it's fair to go for something more along the lines of the below:

These specs should give you the optimal 1080p experience (and could probably even push for 1440p if your headset can manage it and you opt for the higher-end hardware, though no promises).

So what are our thoughts?

In summary, despite being a VR exclusive and having what will likely be some pretty high-end recommended specs, Alyx is looking to be very awesome and very Valve, if you will. But if you're still not convinced, then talk to our Toby, who will be happy to talk to you about just how much he loves Half-Life, and how excited he is for Alyx. If he can't convince you, no one can!

And speaking of Toby, if you're wanting to checkout a playthrough or two before you pick up Alyx for yourself, then keep an eye on our YouTube channel, where we'll be putting up Toby's very own campaign - though no promises that he won't be screeching like a right little Headcrab the whole way through...