×
Home RecSpec RecSpec: Cyberpunk 2077 - some tips to maximise your FPS

RecSpec: Cyberpunk 2077 - some tips to maximise your FPS

Cyberpunk 2077 is finally here, but not without some technical problems...

As everyone and their respective Grandmothers will be aware, Cyberpunk 2077 has finally arrived after its 8 long years of development and multiple delays.

Masterpiece as it could be though, it's currently giving a lot of hardware a hard time, with various optimisation issues, plus bugs and visual glitches galore. Even those sitting on high-end hardware like the new 30 series cards and Ryzen 5000 series chips are having some struggles, especially so in densely populated city areas, and high-octane action sequences, with a particular car chase scene ending in more than just cars crashing for many users. And let's not even mention the consoles, both current and last gen... Still, we've at least had some pretty fantastic memes come out of the whole ordeal, like this one:

So, for those both with and without the hardware to run CP 2077 smoothly, as well as those still looking to build new systems and potentially pick the game up in the new year, today we'll be giving you a few tips and tricks for fine tuning settings, and some advice on which hardware will give you some good, or at least acceptable results at both 1080p and 1440p too. For those of you hoping to play at 4K though, well, I guess there's always deep pockets, hope and maybe prayer?

Jokes aside, let's start with a few tips that anyone on any hardware can use, to try and garner a few more FPS without damaging the visual fidelity of what is possibly one of the most gorgeous games of the last decade.

If you aren't already on the latest drivers for your GPU, then update ASAP. NVIDIA's latest drivers addresses many of the launch day optimisation issues that plagued a lot of PC users, so this is definitely the first place to start. This should at least get a handful of FPS back in some of the more taxing areas of the game, as well as helping resolve a few of the graphical issues that were occurring fairly frequently for some players. 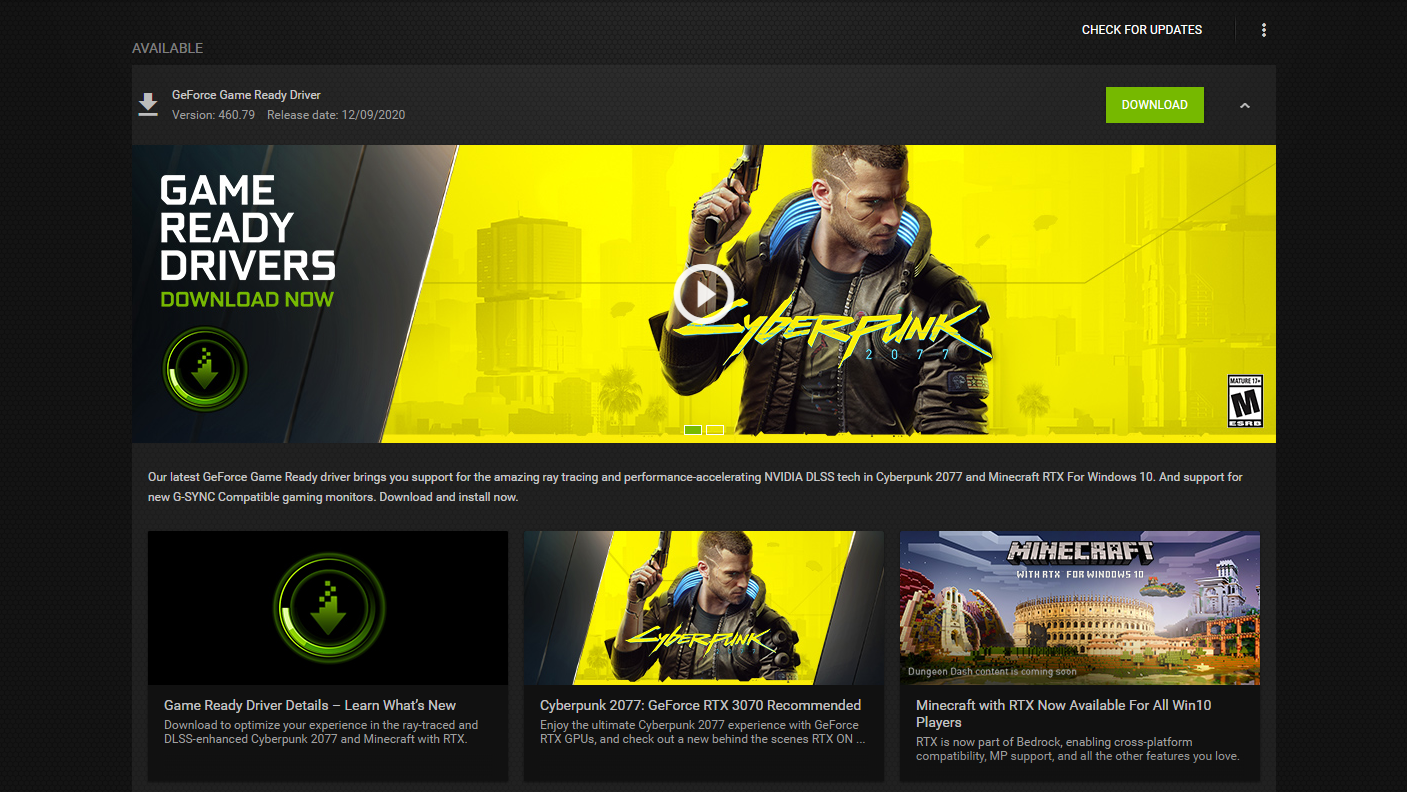 RTX OFF - or at least, mostly

Yes, despite what may have been preached in the lead up to the game's release, NVIDIA optimised or not, and even with those Gen 2 RT cores, this game will hit your hardware square in its hot little face with full Ray Tracing enabled. Even on some of the higher in-game presets, RT is only set to medium by default, which really tells you all you need to know on the performance impact front - so if you were hoping to run the Ultra RT settings, you might need to reconsider.

A few reports have pointed out that using RT reflections but disabling all other types of Ray Tracing is a good middle ground. Many feel that the reflections are the most notable difference between RTX on and RTX off, whilst only offering half as much of the impact to a system's hardware compared to having everything enabled, even only on those medium RT settings.

Equally, contrary to what many might assume, CP 2077 still looks absolutely phenomenal without RT enabled. The design team clearly did a fantastic job with the traditional global illumination methods, so for those with a less keen eye, running at 1080p, or just moving through the world a lot faster, RTX Off may not even affect your enjoyment of all the eye-candy on offer in CP 2077.

Turning things down to Medium

Another way to help smooth those choppy visuals, turning your settings down to the Medium preset can also be a real frame saver. Now, for those used to running on high and ultra settings, this might feel pretty bad, and especially considering how much of a noticeable difference usually exists between the visual fidelity of these settings. True and blatant as this may be in other titles, surprisingly, in CP 2077 medium settings are still gorgeous to behold. You might not think it, but from what I've seen and heard from others, most can't actually tell a difference between medium and high settings, unless they really start scouring their screens with an eagle eye.

Also worth a note, the best part of CP 2077 from the settings side of things, is how easy it is to tune on the fly. Switching between presets and individual settings does not require any restarts or reloads, and there's a plethora of different visual effects that can be tinkered with - from shadows, reflections, ambient occlusion, ray tracing, texture quality, anti-aliasing and numerous more, if you have a few minutes spare and a little patience, you can really fine tune to your heart's content.

There are still a few people that remain sceptical about DLSS after the fairly poor show given by DLSS 1.0. But since the arrival of DLSS 2.0, it's almost a given that it should be enabled. If you haven't read or seen much on the new 2.0 version, I'd highly recommend having a look at some articles or video coverage. It marks a significant step forward from 1.0, with many saying that they either can't tell the difference (from native resolution), or even that it looks better than the original. 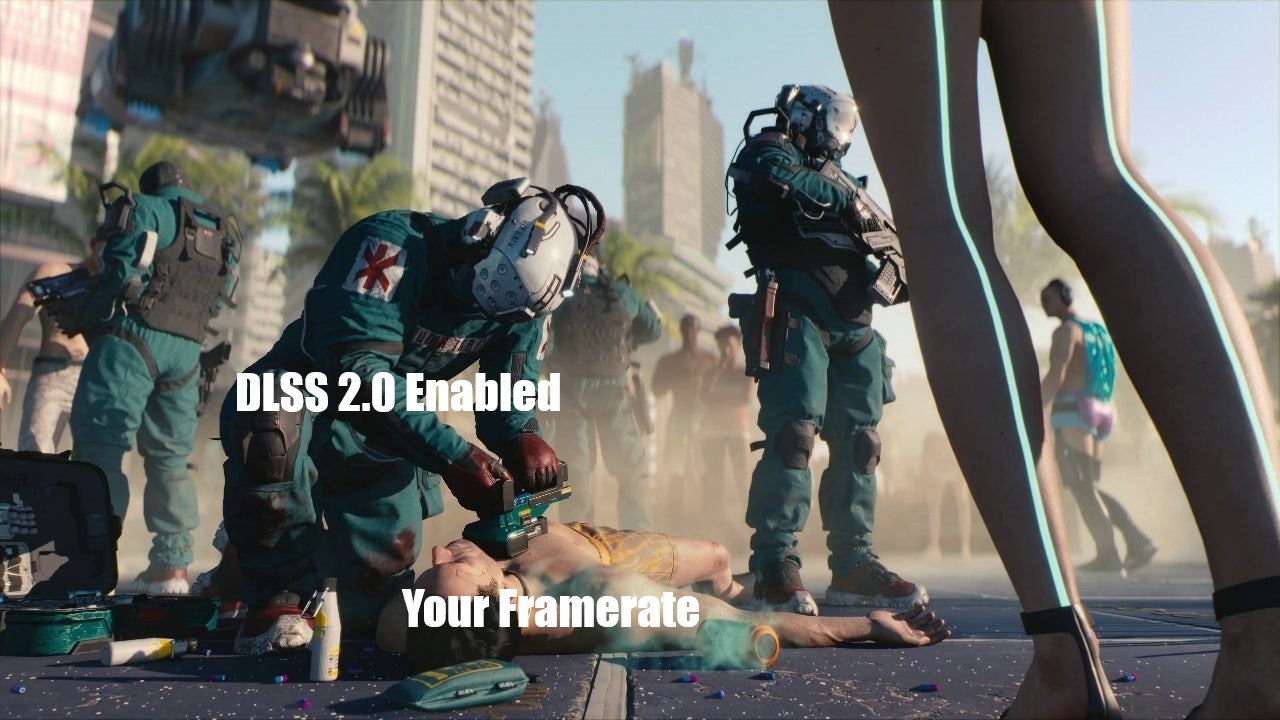 Testimony aside, for quite a few folks, it is by far one of the easiest ways to claw back a significant number of FPS in Cyberpunk 2077, and without negatively impacting on the visuals. Even enabling the lowest DLSS setting, listed as "DLSS Quality" (meaning smallest performance boost but best visual quality), has been seen to offer anywhere from 10-15FPS to as much as 30FPS in some areas of the game, which if you were previously sitting at a steady 40FPS, is pretty good news. At the very least, it's a great placeholder until you can afford to upgrade your GPU in the future.

These few handy tips aside, you may be waiting to purchase some new hardware, either as an upgrade or for a new system. Alternatively, you might not have Cyberpunk yet and are wondering whether your existing set-up will be able to handle it. So, allow us to give you some quick advice on which GPU and CPU will work in favour of your framerates when it comes to Cyberpunk 2077.

These suggestions are based off of what we've seen from real-world performance thus far, rather than those outlined by CDPR on the Steam Store page, which, at least in the current game state, haven't quite aligned with existing player experiences. These recommendations are also based on trying to aim for an average of 60FPS, with as few 1% lows as possible (i.e. more consistent/stable framerates, rather than higher average framerates), as well as assuming a minimum of Medium settings and both RTX and DLSS Off, in order to retain an acceptable baseline level of visual fidelity.

RTX 3090 (This is no joke - even with a 3090 at native resolution and medium settings, framerates can still dip below 60FPS at times)

And of course, if you were to enable DLSS, then these pairings should be absolutely fine 99% of the time.

As you can tell, Cyberpunk is a very heavily GPU-bound game, and 4K native is definitely going to be a no-go for most, with even the 3090 unable to maintain a reliable 60FPS. If you are one of the few looking to run CP 2077 at 4K, then check out the videos below by Optimum Tech and Hardware Unboxed. They also cover the advantages of running with DLSS enabled too, so if you were still in need of convincing just how many frames it can save you (and with minimal or no loss to visual quality), then you should definitely give them a watch too.

All in all, the performance issues with Cyberpunk aren't quite as bad as some initial reports made out, but they are most certainly there, and there's certainly nothing worse in an open-world RPG than being completely taken out of the experience by poor visual fidelity or spiking framerates.

Still, hopefully with some of the tips and tricks we've covered here, you'll be able to mitigate some of those performance woes, and with that, we wish you the best of luck!

Have you been playing Cyberpunk 2077? What's the experience been like for you so far? How's your hardware been handling things? Perhaps you have some tips and tricks of your own you might like to share? Let us know down in the comments!