I think it's fair to say that gaming CPUs are in a weird place right now. Between Ryzen 3000 and 10th Gen last year, then Ryzen 5000 and 11th Gen this year, there's been a lot going on.

With AMD's constant drive for improved performance, Intel's ever more apparent stagnation, plus availability issues and fluctuating prices too, it's definitely been difficult to keep track of which processors are the most worthwhile for new gaming PCs. 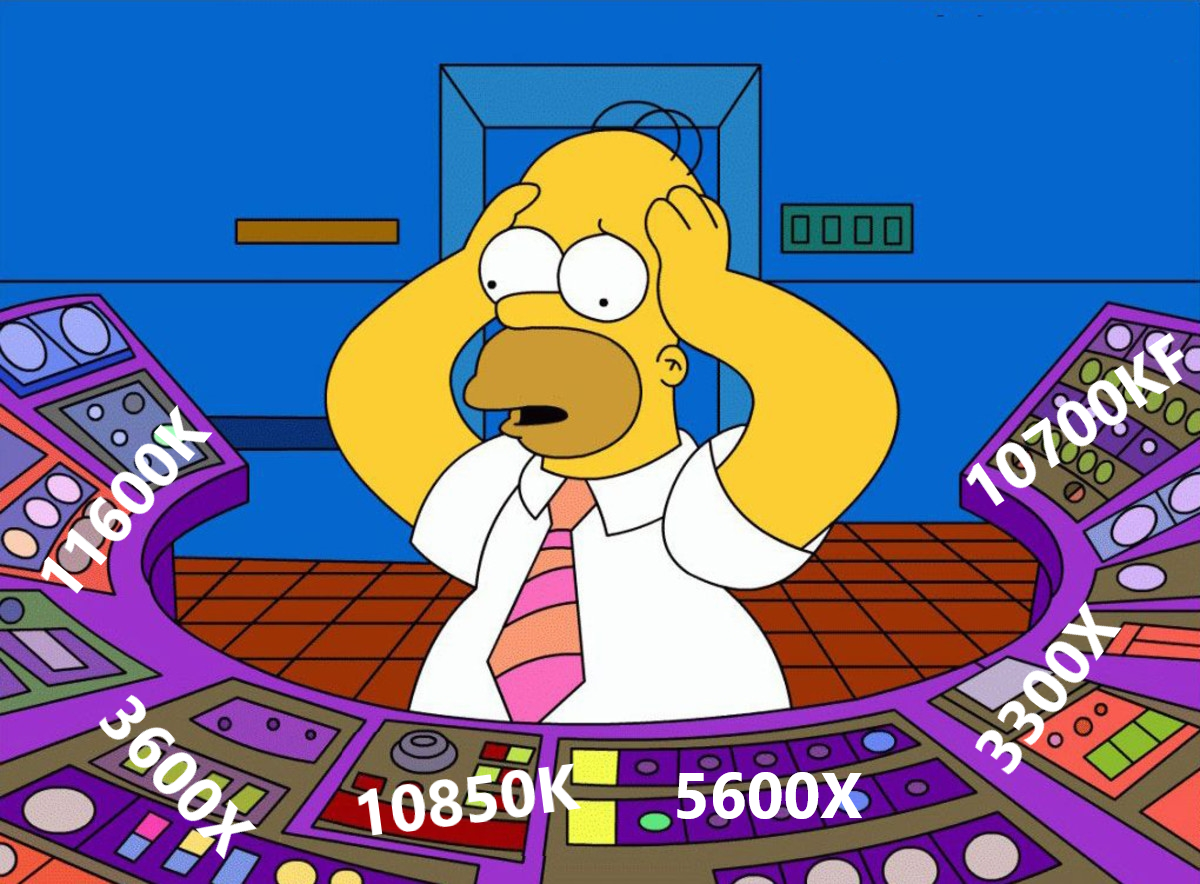 For anyone who's not been keeping up (and arguably even for those that have), it's been quite the show. I've been trying to find a suitable analogy for a while now, but I think I've finally settled on a hardware bar fight:

The Ryzen 3000 series gang are sat sipping their pints, when the 10th Gen crew waltzes in as though they own the place and order a round of extremely overpriced whiskey. Ryzen 3900X laughs and points at 10th Gen, saying they look a bit warm in their Gucci coats and maybe they don't belong here. In an attempt to assert dominance, the 10th Gen crew start swinging at the Ryzen 3000s, catching them a little off guard. But they throw fists back and hit a lot harder than 10th Gen were expecting. An intense brawl ensues and 10th Gen wins, just barely, ending up nigh comatose on the pub floor. The Ryzen 3000 gang, who had an awfully good time, find this result highly amusing.

Moments later, a bigger, scarier gang called Ryzen 5000 rocks up and sees that there's been a punch up. They congratulate the Ryzen 3000s and without hesitation, walk over to the 10th Gen lot and kick them while their down.

But in some strange turn of events, the Ryzen 5000 crew strip the 10th Gens of their Gucci coats and sit down to drink their unfinished whiskey, telling the Ryzen 3000s to beat it because they shouldn't be in here anyway. The Ryzen 3000 crew reluctantly leave, feeling a tad inadequate and overshadowed by those 5000 series guys. 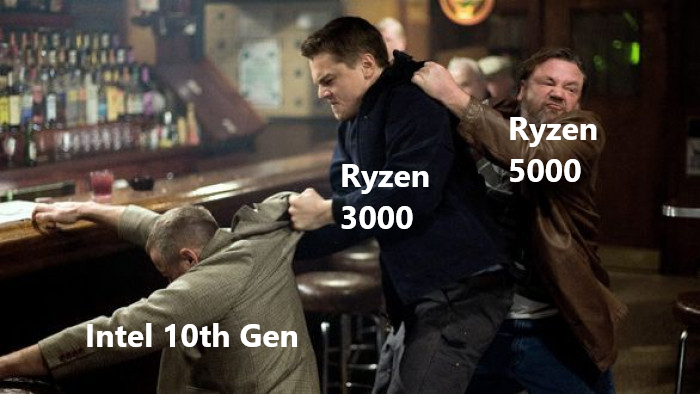 Some time passes, and most of the 5000 series crew leave the bar one by one, until only 5600X remains.

Just before the bar is due to close, 11th Gen enter the pub. They see the 10th Gens still barely conscious on the floor, and help them to a corner booth where they sit and sweat nervously, scowling at 5600X. Except for 11400F.

Though a fair bit smaller than 5600X, and way smaller than 11900K (who's sat being cuddled by his bigger little brother, 10900K), he walks right up to the bar and sits down next to 5600X. He gives him a look and 5600X shifts in his new Gucci coat, sipping his whiskey to try and take the edge off. 11400F makes a short sudden movement in his direction, making 5600X flinch. 11400F laughs and returns to the corner booth grinning like it ain't nobody's business...

So, to conclude: in some strange reversal of parallel universes, AMD are in the unique position of having processors that mostly outperform Intel's. As a result, those processors now cost a premium and with those same processors being so difficult to come by without paying an arm and a leg, even AMD's previously budget friendly CPUs have also gone up in price. That's left an enormous gap encompassing the entire sub-£200 market.

But that's where Intel 11th Gen comes in to play. Well, some of it at least...

In all honesty, 11th Gen Intel has so far been a fairly underwhelming launch. There wasn't exactly much hype in the run-up (no surprises there) and it even got pushed out the door sooner than expected. I think this could be in part due to Intel's new CEO Pat Gelsinger who, upon stepping up to the plate, decided to just wipe the slate clean ready for 12th Gen. With Ryzen 5000 series already out and making claim to both the productivity and gaming scene, Intel certainly had a lot to compete with, so this move makes a great deal of sense.

In practice, this will probably be good for Intel in the long run, but as for right now, it's resulted in a rather mixed bag to say the least. Benchmarks have been bizarre to look through, with the likes of the 11900K performing worse than even the 5800X and last gen's 10900K, being anywhere from 5-15% slower in most titles. That's whilst drawing more power, and running monstrously hot. 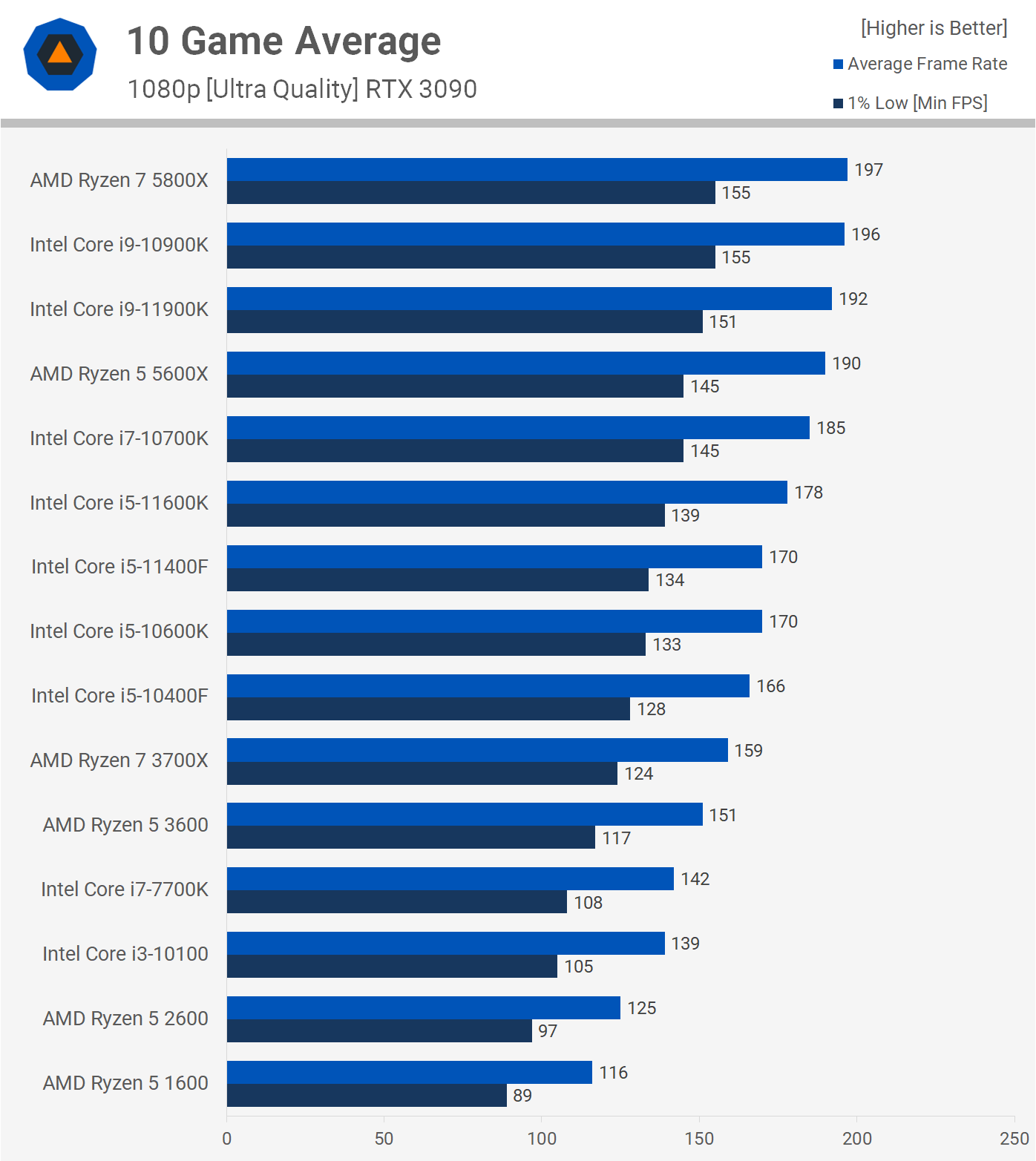 Of course, it wouldn't take a tech genius to have seen this coming though; 11th Gen was originally designed to be on a 10nm process but ended up being back-ported to good old 14nm instead. Trouble is, with the architecture relying on a far more power efficient process, it meant that matching the 10 cores of the previous generation's i9-10900K was a no-go. Thus, here we are: with an i9-11900K sporting only 8 cores, worse performance, and a higher price-tag too. Worse still though, are the similar issues that have made their way down the rest of the product stack as a result, leaving us in a world where anything from an i5-600 SKU or up is almost senseless for a custom builder. Not just for purely gaming workloads, but also for productivity, since AMD can offer both last and current gen CPUs that could wipe the floor with them in that regard.

It's a shame really, as Intel were in a prime position to take back some market share at the high-end; it's no news to anyone that the Ryzen 5000 series chips have been fairly tricky to find. And much like all those shiny new GPUs, with their market leading performance, limited stock, and high demand, getting one at a semi-reasonable price has been just as much of a challenge. That said, without any competition from Intel until now, even if you had found a 5000 series chip at MSRP, you'd have still paid somewhat of a mark-up compared to Ryzen 3000 chips last year. In other words, upwards of £300 for even just the 6-core Ryzen 5 5600X. It's not the worse value by any means, especially for the performance it offers, but it's certainly pricey compared to AMD's previous fan favourite, the Ryzen 5 3600, which came in at well below the £200 mark. 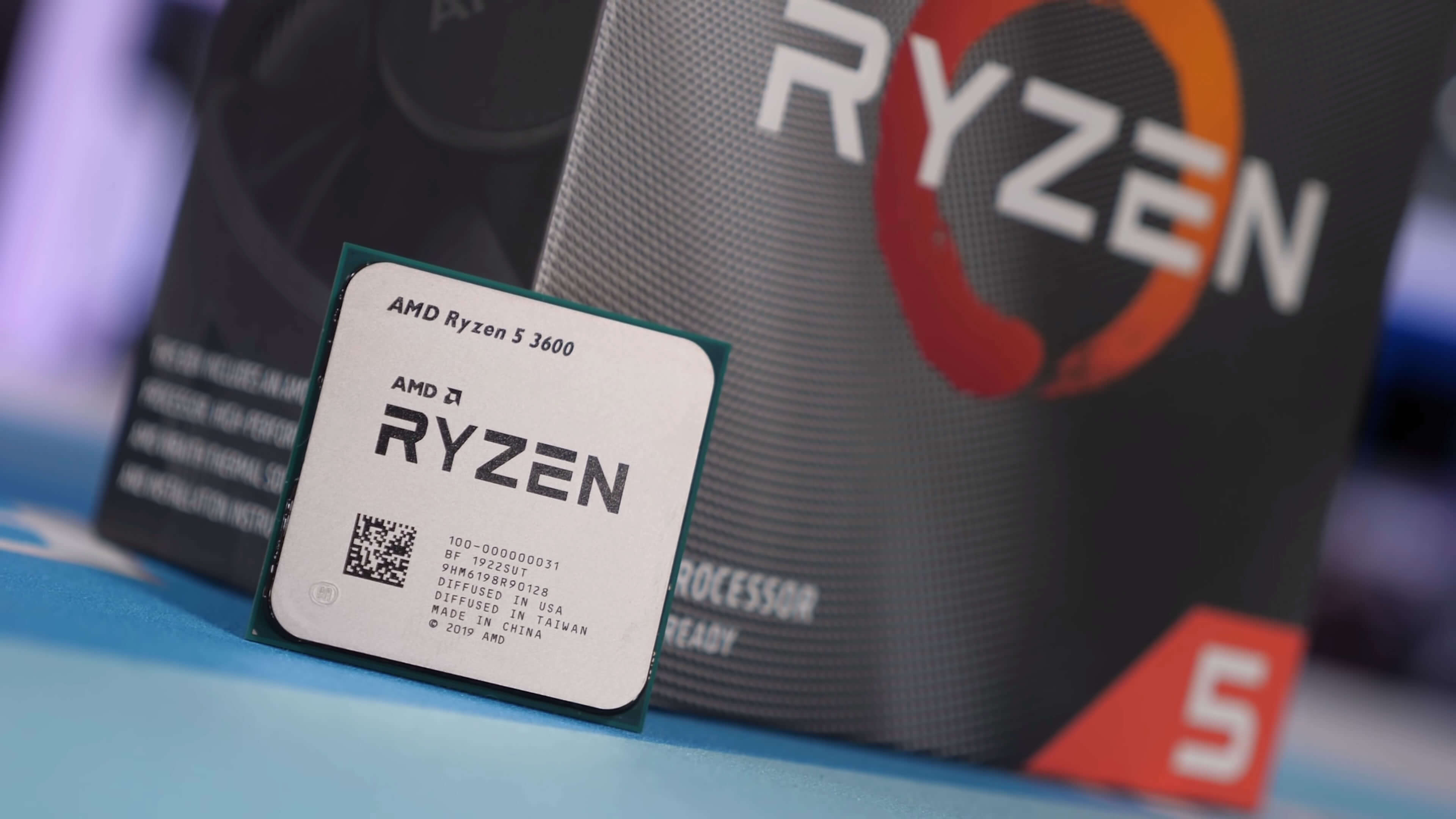 However, despite the total debacle of Intel's HEDT offerings, there's actually a rather pleasant surprise waiting further down the stack. To just about everyone's amazement, the Intel Core i5-11400F, also a 6-core CPU, is not only in abundant stock but comes in at a mere £150.

Naturally, cost and cores doesn't mean anything if the processor can't perform sufficiently, but that's where the real kicker comes in. Benchmarks for gaming have actually shown that the 11400F, when allowed to draw power above its default 65W, can push as many as 170fps at 1080p. That puts it above both the previous generation's 10400F and AMD's Ryzen 5 3700X (an 8-core CPU), as well as smack-bang in the middle of the Ryzen 5 3600 and 5600X. Granted, the stock cooler for the 11400F isn't exactly sufficient when allowing it to go over its default 65W, but for the £30 saved on the 11400F you could easily find an aftermarket cooler which is more than ample. And what's more, unlike the marked-up Ryzen CPUs, the 11400F will be significantly easier to get your hands on. 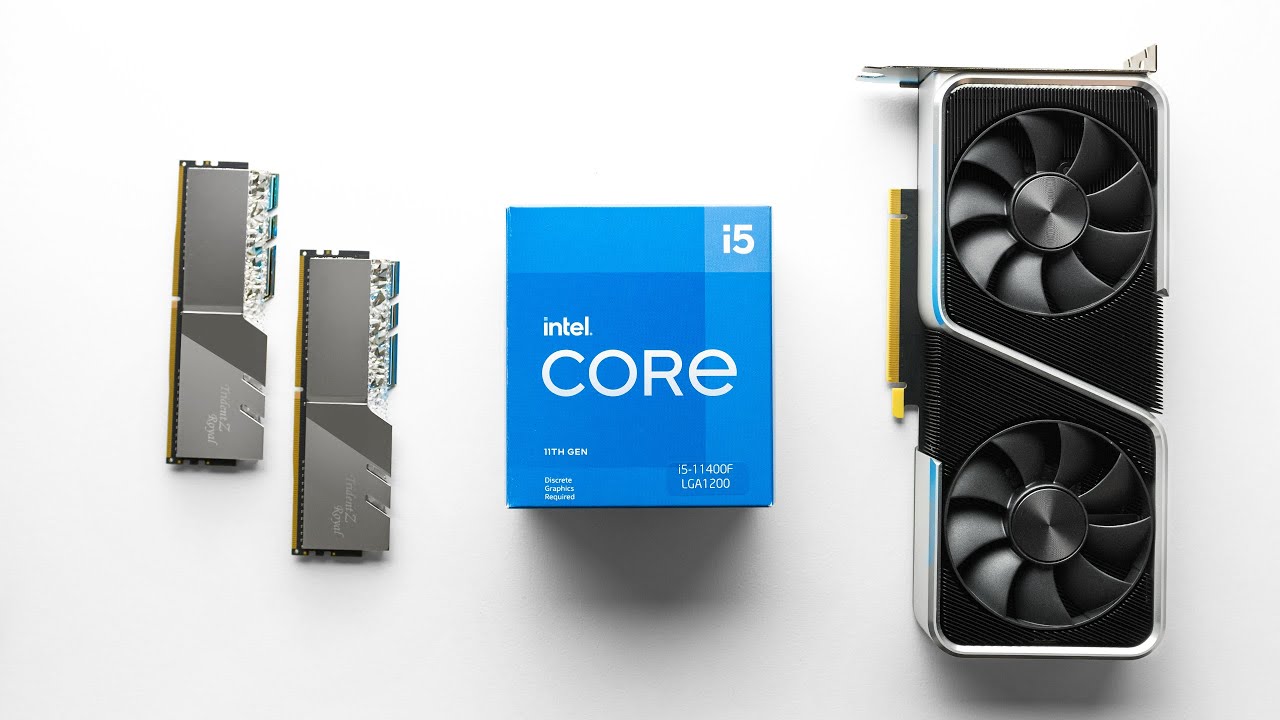 All-in-all this represents fantastic value from Intel. Especially when you consider that their own £500+ 11900K will only offer an additional 11% performance on average at 1080p (and almost no difference whatsoever at 1440p/4K).

As is often the case with PC hardware, a newer generation means lower prices for last gen parts. Although previously less compelling compared to the once cheaper Ryzen 3000 series CPUs, 10th Gen Intel still has solid options available, many of which are now markedly cheaper than before.

In short, CPUs for gaming are a little all over the place currently. Not necessarily just from the performance perspective (looking at you, 11900K), but namely from the pricing standpoint. On the one hand, higher-end CPUs seem largely over-priced for the most part. Meanwhile, a few mid-rangers are hitting slightly below the mark, making their costs difficult to justify. Yet, oddly enough, when it comes to those select few processors from Intel, there's actually some incredible value to be had.

So if you're in the market for a 6-core CPU right now, look no further than the Intel Core i5-11400F. You certainly won't be disappointed.

Let us know your thoughts down in the comments. What are your opinions on Intel 11th Gen? Would you still rather go for the 5600X? Hit us up down below.