CPU Cooling. It's usually not the most exciting part of speccing a PC, and the job is often left to the uninspiring stock cooler.  But how does inadequate cooling really affect the performance of your system?

Just a few weeks ago we saw Intel launched their latest 10th gen offering, and all over the web and Reddit there were 'leaked' reports popping up of just how power-hungry the flagship i9 10900K model really was.

But it got me thinking, just how much cooling am I going to need to get the most out of this processor and have it running stable? For context, the previous-gen i9 9900K was the go-to CPU for many workstation users, with the 10900K being the natural replacement. So, stability is just as important as pure clock speed, after all there's no point in running a super-fast workstation if it's going to fall over every couple of hours.

With that in mind, I rounded up a selection of CPU coolers and got testing.

A fair warning before you go any further, we aren't hardware reviewers, if you're looking for some good, balanced hardware reviews, I suggest to check out our favourite, GamerNexus. The purpose of these tests was purely to share some insights internally within Novatech; we thought they were quite interesting, so have decided to publish them. Therefore the graphs aren't quite 'production-ready', and my testing methodology probably needs some attention, but it does the job. 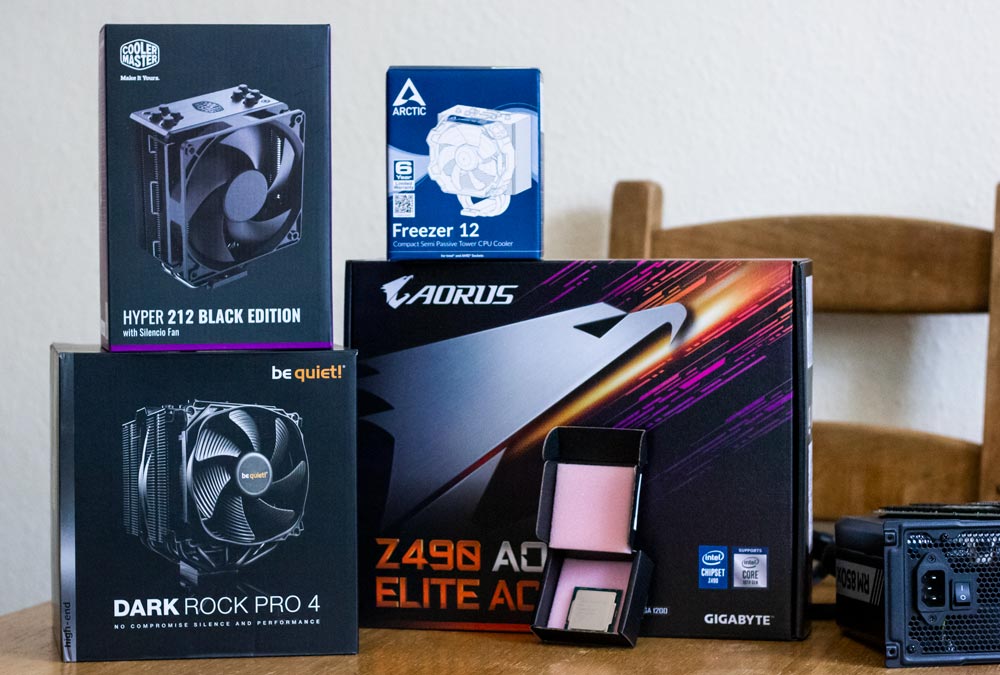 The test kit. My living room has become the dev lab since lockdown.

Note: MCE and XMP were both disabled, and Turbo Boost was set to auto. The air coolers were tested in 'open-air'; the liquid cooler was tested in an NZXT H710 case. 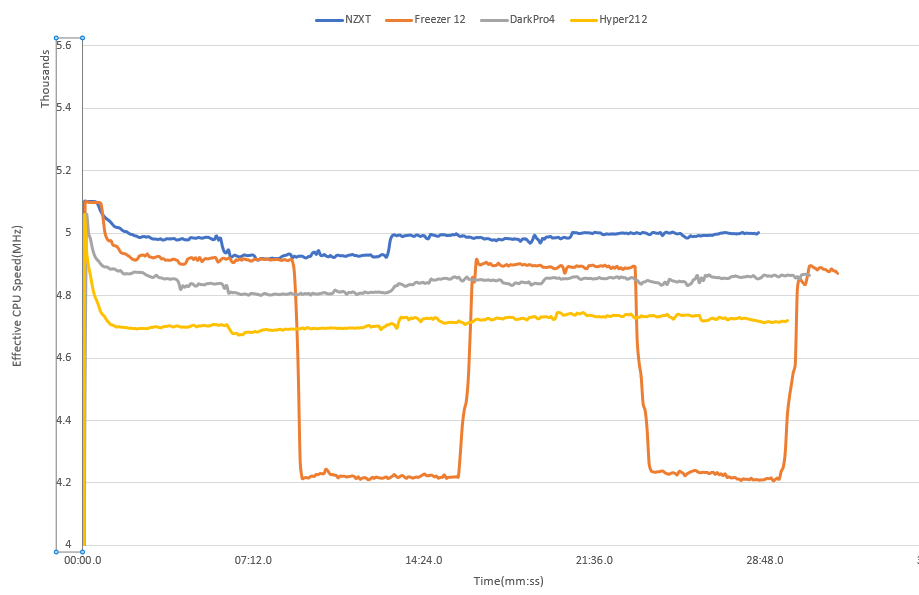 This shows the effective speed of the i9-10900K under 100% load over a  30min period. As you can see, there is a linear link between the cooler and the stable speed the CPU is reaching, the more effective coolers are providing a higher stable average clock. Please note, individual threads may be going up and down within this, this is an abstraction to demonstrate the end-user experience. 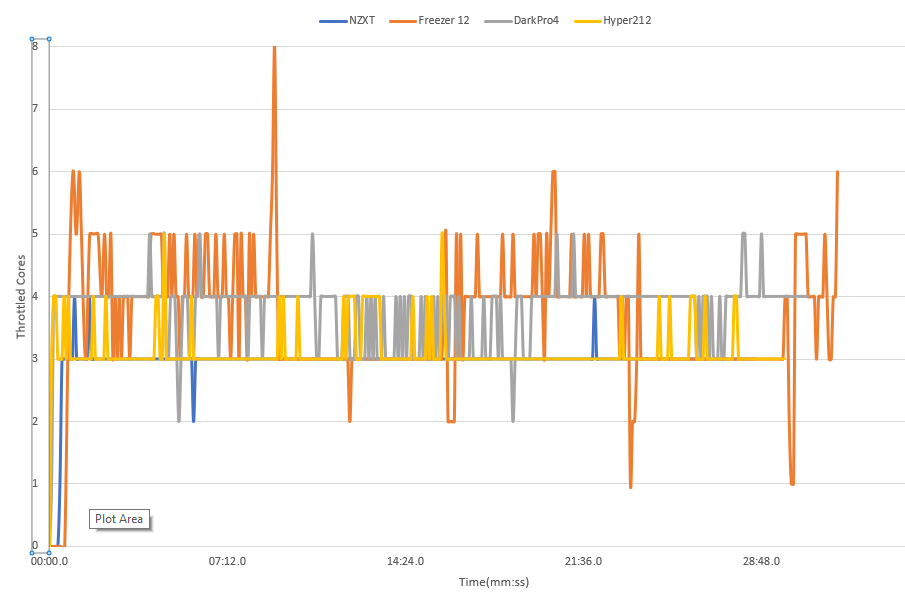 Here we see the number of cores registering that are currently throttling due to heat on the same timescale as the previous graph. This adds slight context to the graph above, notably the variable performance of the freezer 12. In summary, the better the cooler, the fewer core throttles, the higher the average speed as more cores can hold higher clocks for longer. 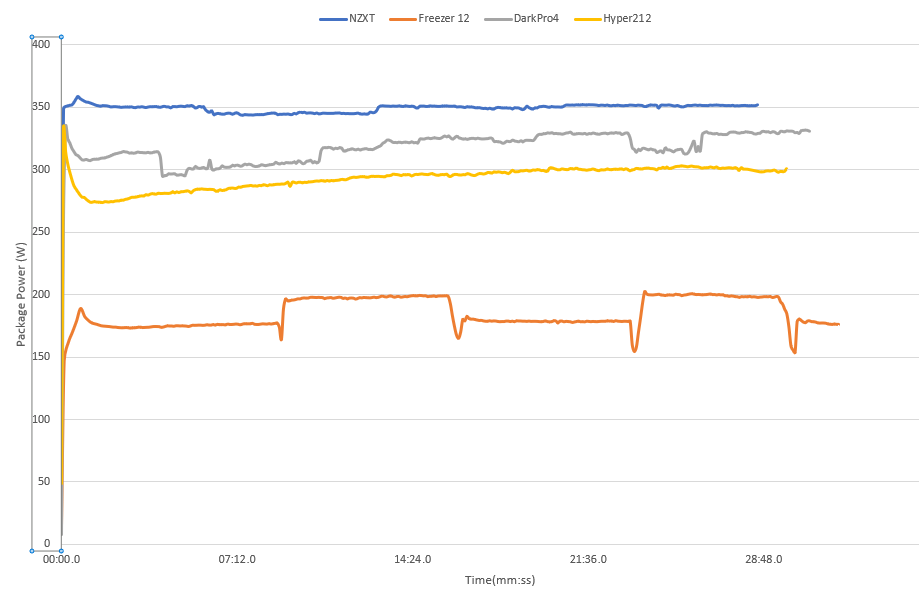 This shows the power draw for the package under different coolers, same tests. These were the results pulled from HWiNFO; you may have to take them with a pinch of salt.

This clearly demonstrates that the TDP of the i9 under load and at advertised speeds is far higher than the listed 125W (this is the PL1 at 3.7GHz), this is something that you need to pay attention to with cooler and PSU specifications.

I would also point out that given the throttling even under the liquid cooler, it still appears that there is potential to go faster.

So, in conclusion, the 10900K, although maybe not as exciting as some of the new AMD Ryzen chips, is still a great choice for high frequency clock speed workloads, such as creative work and gaming. Although, it's clear that you'll want to pair this CPU with a high-end motherboard with quality VRM's, and definitely allocate a bit more budget towards your CPU cooling solution to get the most out of it!