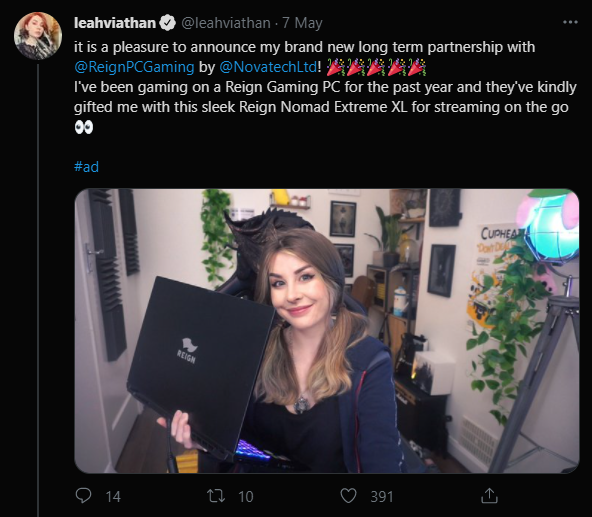 We've been really pleased to see just how far Reign Gaming has come over the last year. It really has been wonderful to work with so many new people, especially all the amazing content creators who help us continue to provide all of you with the best spec'd gaming systems around. Well, we're super excited to announce that we've had a few more friends from Twitch join us through our Reign Gaming Ambassador programme - Leahviathan and FUT_FG! Welcome to the family guys!

Leahviathan (a.k.a Leah), has been live-streaming since 2015, and was thrilled to announce her official partnership with us during her Twitch Anniversary stream earlier this month.

For dedicated fans, the partnership probably didn't come as a total surprise, since as many will already know, Leah previously worked with ourselves and ASUS ROG last year, when we built her the limited-edition Reign Sentry Lux - the very same PC she has been using to stream for almost a year now!

The official partnership couldn't have come at a better time for Leah either, as she was planning to travel abroad later in the month to host Techland's new Dying Light 2 video series, "Dying to Know." As such, she needed a way to continue streaming to her Twitch following of over 160,000 fans, since her existing mobile platform wasn't powerful enough to handle both gaming and live-streaming simultaneously.

But that's where we came in, and provided her with one of our brand-new Reign Gaming Laptops, the Nomad Extreme XL - a 17" gaming laptop featuring an Intel Core i7 processor and NVIDIA RTX 3080 GPU - meaning Leah was able to continue streaming as normal even whilst she was away.

Meanwhile, and in fact that very same week, FUT_FG (a.k.a Faraaz) was equally excited to celebrate his birthday by announcing our new partnership too - quite the birthday present indeed! 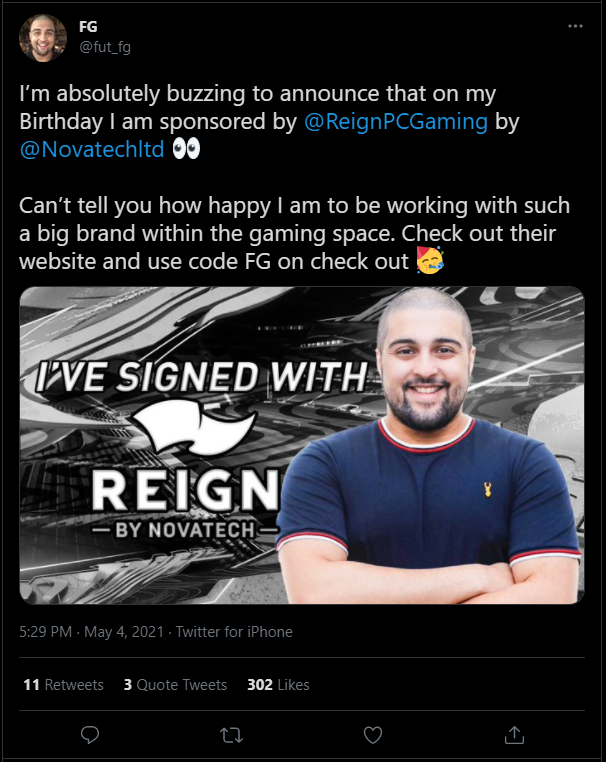 Following in the footsteps of fellow FIFA Streamer Chuffsters, as well as other popular content creators such as Eerieissss and of course, Leahviathan, Faraaz marks the fourth new official Reign Ambassador to join the family this year.

A Twitch partner, YouTuber and avid Manchester City fan, Faraaz has a combined following of over 65,000 fans, all tuning in for their daily dose of FIFA Ultimate Teams and football shenanigans.

As well as joining his fellow streamers and content creators, Faraaz will be in the line-up alongside a whole host of real-world footballers too, including A.F.C Bournemouth Midfielder Lewis Cook, and Portsmouth-born Mason Mount who, much like FUT_FG, is also managed by the revered ICM Stellar Sports group.

Jerry Hughes, Digital Marketing Executive here at Novatech, expressed our enthusiasm to work with the pair, saying, "We're so pleased to welcome Leah and Faraaz to the Reign Gaming Family. They both make absolutely brilliant content and we love that we're able to support them in continuing to do so. We'll be looking forward to making some new exclusive content with them too in the future, and who knows, maybe even some in-person events once the UK starts returning to normal!"