×
Home TechShot TechShot: What's Jensen been cooking this time? Apparently, it's an RTX 3090...

TechShot: What's Jensen been cooking this time? Apparently, it's an RTX 3090...

The #UltimateCountdown is over, and with it, NVIDIA have announced their latest series of GPUs. As it turns out, they really are quite the gamechanger, if what the paper specs are proposing is true...

Yes folks, that's right, the 3000 series is here and it's off to a colossal start with the brand new RTX 3070, 3080 and 3090 graphics cards. These bad boys aren't just colossal in size and power draw, oh no. The 3070 alone will seemingly be offering in excess of 2080 Ti level performance, and will be faster too, but starting at only £469 for the founder's edition cards. 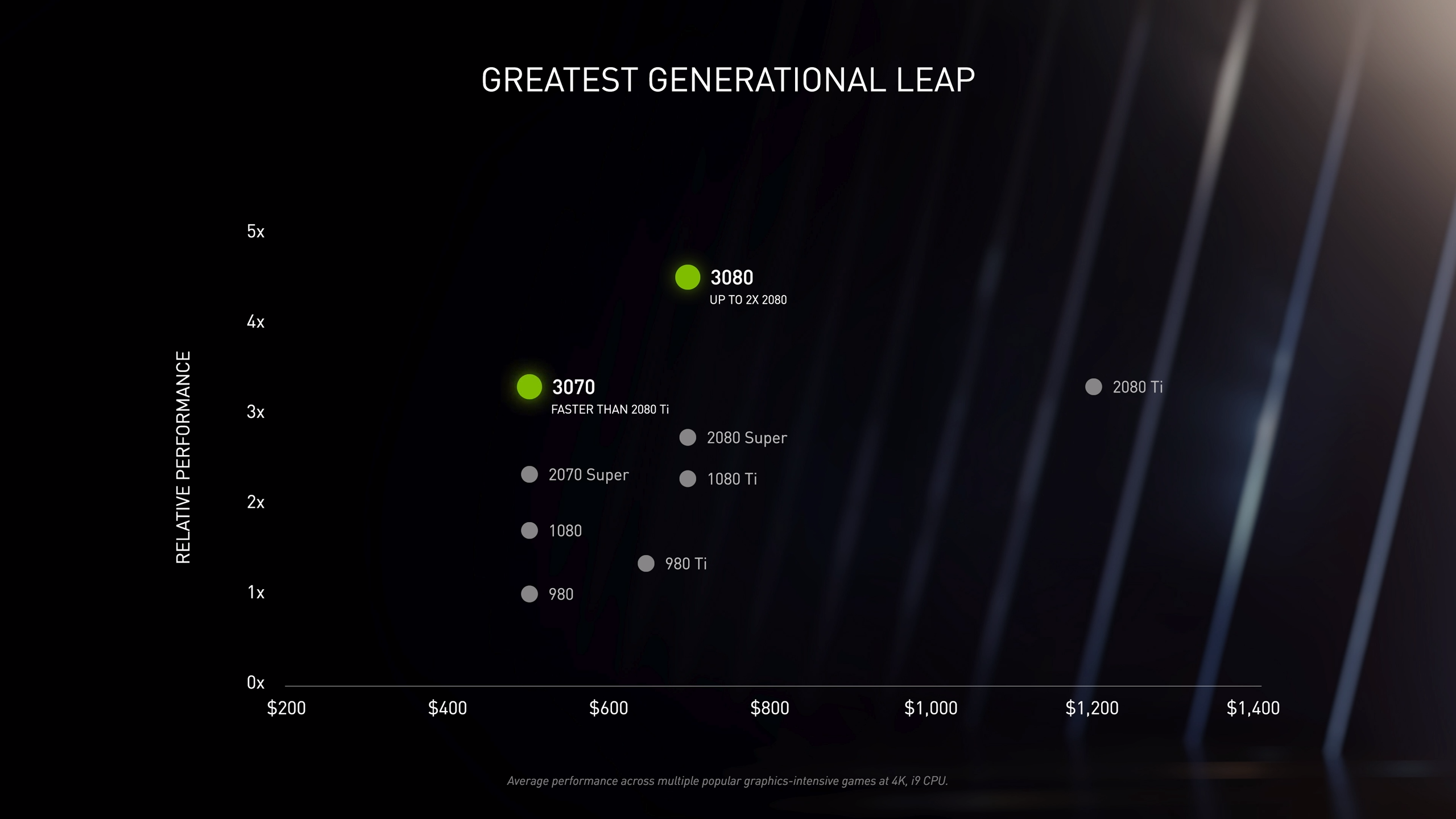 You read that right, NVIDIA's new "mid-ranger" will be only a third of the cost of the 2000 series' most powerful card available on the consumer market. And if you think that's impressive, you'd be right, but in case it wasn't enough, the 3080 which will come in at the £649 mark, will offer essentially 2X the power of the 2080 but for half the price.

And then, of course, there was the 3090, which was said to be capable of running Control and Wolfenstein Young Blood at 8K 60fps... in theory.

Jensen was quite enthusiastic about NVIDIA's latest advances in ray tracing and DLSS technology, and both seemed to be used a lot in their testing at higher resolutions (it's quite hard to see, but you might notice the very convenient footnote, "where applicable").

We're not saying that the 3000 series could be using the AI assistance of DLSS as a crutch for more demanding resolutions, nor are we suggesting that the biggest differentiator between the 2080Ti and the new 3000 series cards is more capable ray tracing hardware, but we are wary that this does mean we don't yet know how the cards will perform at high native resolutions and without DLSS or ray tracing enabled. In the meantime however, Digital Foundry have completed some very early benchmarks comparing the RTX 3080 to the RTX 2080 across several titles at 4K - due to some NDAs they were unable to offer exact numbers and were still required to adhere to certain parameters, but the results are still pretty hard to argue with, with an average improvement over the RTX 2080 of around 80%...

On the other hand, playing games at native resolutions could well become less relevant with the cited improvements to DLSS technology, and if the hardware is no longer impeded by the use of ray tracing, then "RTX on" will certainly be much more desirable as more and more games implement it - which juding by the numerous trailers popping up on Youtube for upcoming AAA titles featuring "RTX on", seems like that could well be the case.

It was also noted in the announcement (which you can find below), that the cards would be supporting PCIe 4.0 technology, which will mean faster rendering and load times compared to PCIe 3.0, though once again, we will have to wait to see how much of a noticeable difference this will make to the everyday gamer's experience.

We won't be going into a full spec breakdown today, but keep an eye out in the near future. Especially as people start getting their hands on these cards and as AIC partner models (e.g. ASUS' ROG Strix models and such) start to hit the shelves; we'll be closely watching benchmarks, and hopefully doing some of our own - we're all for the hype train but when it comes down to it, real-world performance is all that matters to us.

What are your thoughts on the new 3000 series? Are you on the hype train? Sceptical? Will you definitely be buying it for your new build or to upgrade your prebuilt gaming PC? Let us know in the comments down below!