×
Home TechShot TechShot: Stock is out and benchmarks are in - how does NVIDIA's RTX 3080 really stack up?

TechShot: Stock is out and benchmarks are in - how does NVIDIA's RTX 3080 really stack up?

When NVIDIA announced the upcoming release of their new 3000 series of GPUs, they were boasting some very impressive paper specs that had an immeasurable number of people boarding the hype train. In fairness, it was kind of reasonable with the promises made, with Jensen implying a performance increase that would see the new RTX 3080 crippling the position of the RTX 2080/2080 Ti, especially when he declared that their Founder's Edition (FE) card would be starting at only £649 ($699) - around half the cost of the last generation's equivalent offerings at anywhere between £1000 to £1200.

And now it's here! ... or at least it was, very briefly, before selling out just about everywhere... Still, whilst we wait for the stock levels to replenish, we do have numerous benchmarks arriving from all our favourite sources, and well, they're very telling indeed. But are they telling us what we were all expecting?

The answer to that question depends largely on who you are and what you were hoping to use these cards for, as well as what carriage you were sitting in (if at all) on that big old steaming hype train...

So what do the benchmarks say?

Well, a lot actually, and I think the best way to go about comparing these cards is to look closely at the actual performance differences between the last gen top-end cards without considering pricing, at least initially anyway. We will get to price-performance discussions, but for now, we'll just be looking at the benchmarks and I'll explain why that is later on. Equally, rather than presenting dozens of charts for individual games, I'll be borrowing a few courtesy of TechSpot/Hardware Unboxed (who you should 100% checkout if you want all the fine figures down to a T). 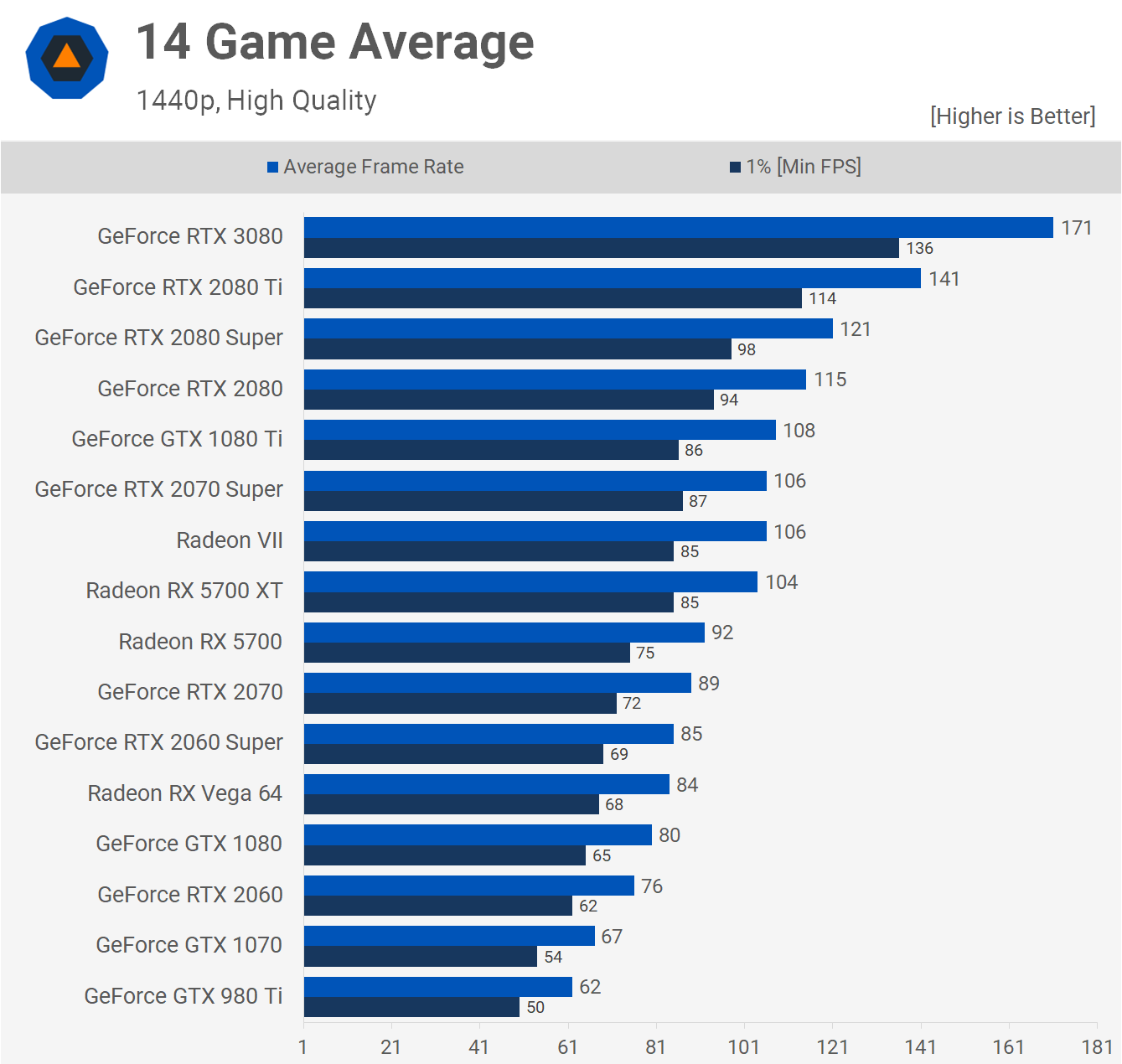 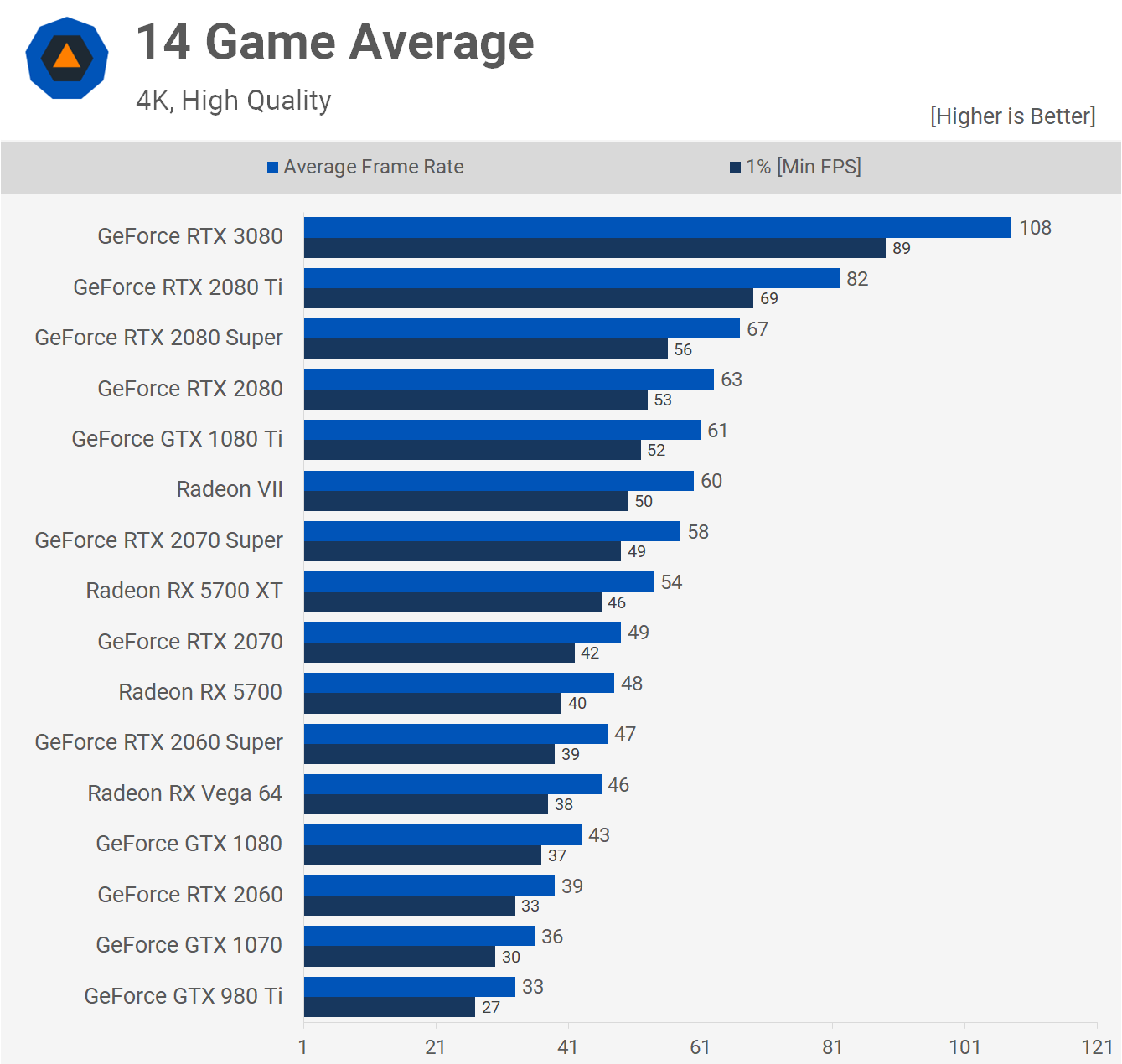 As you can see, the RTX 3080 is indeed the new, fastest available card on the market, and by margins that aren't to be sniffed at. With an average frame rate of 171fps at 1440p and 108fps at 4K (native resolutions too I might add), we're seeing an increase of around 30 frames over the RTX 2080Ti and around 50 frames over the RTX 2080. Not too shabby. But it also isn't 2X performance...

Sadly, the paper launches we see for graphics cards (and even CPUs too) are becoming increasingly skewed by cherry-picked data, which ends up damaging product image in the long run. For gaming specifically, as it turns out, the 2X performance promised was actually in reference to NVIDIA's test results in Minecraft RTX and Quake II RTX... yes, those oh so popular titles renowned for their industry leading, highly-demanding AAA graphics...

Jokes aside, it is rather ironic; at the end of the day, these are undoubtedly very good graphics cards - possibly some of the most powerful cards we've seen in a long time - and yet many are finding themselves disappointed when they couldn't have hundreds of fps in games like Red Dead Redemption 2 on all the highest settings in 4K.

RTX 3080 Performance in our Reign Paladin MK1 - a solid 50 frames at high settings.

And that's the direct result of NVIDIA pushing cherry-picked data to wow people more than they needed to. If Jensen had just said it how it was, citing an average 70% performance increase over the RTX 2080 and at a significantly lower cost too, I imagine most would still have been extremely excited, and without any disillusions on booting up their favourite titles. It would also have helped if they hadn't marketed that 2X performance increase so heavily towards gamers...

Where does this card really shine?

I think part of the issue here is that, from an architectural standpoint at least, these new 30 series cards are likely better designed for datacentres, AI workloads and the professional market, where that 2X claim actually shows up consistently. In a number of benchmarks covering multiple professional workstation softwares including V-Ray and Blender, there is an almost 2X performance increase across the board. So the good news here is actually for anyone in the market for a new workstation capable of carrying out GPU-heavy workloads.

Returning to gaming, my earlier point on why we shouldn't consider cost besides performance was for a couple of reasons. Firstly, to keep us focused on what the card is actually capable of as a piece of hardware, and secondly, to help console recent RTX 2080Ti owners, or even not so recent owners too. Yes, the price is undeniably juicy for the performance on offer, in fact, it's one of the most cost-effective cards when it comes to cost per frame. 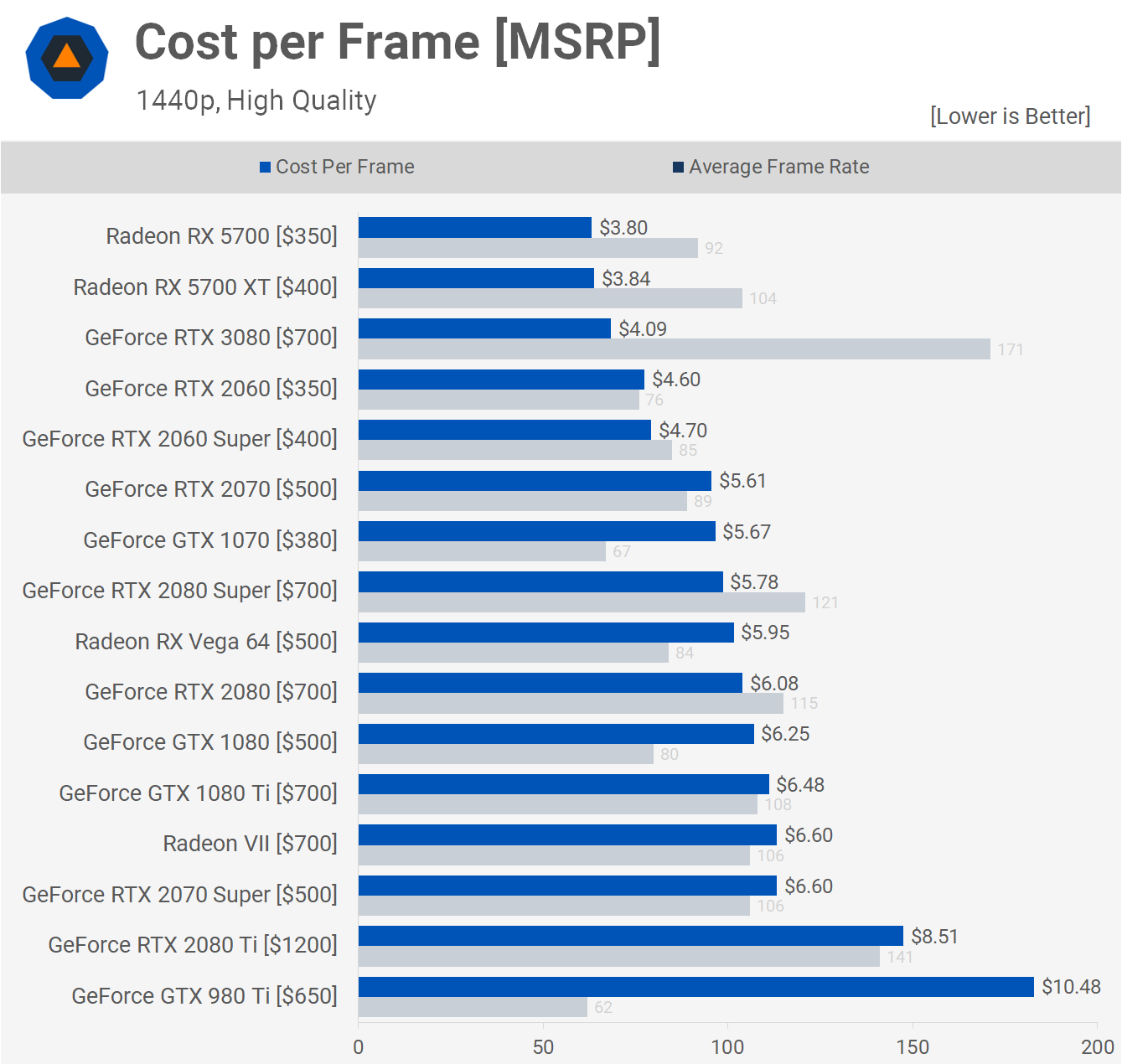 But that's only really the case because of the 2080Ti's previous price tag. As far as performance goes, that 2080Ti is still an absolute beast and is just as powerful today as it was a few weeks ago. Afterall, it's only around 30 frames slower, and we're already talking about frame rates that sit comfortably over the 60fps mark (at 4K) in quite a few titles.

What's more, the RTX 3080 only looks as good as it does precisely because of how much cheaper it is than an RTX 2080Ti - NVIDIA have done an exceedingly good job of leaning into that price slash to build the immense hype we saw on announcement, and equally, at avoiding mentioning how little initial stock there would be....

It doesn't take 20:20 vision to see that stock for the RTX 3080 has been practically non-existent since they launched, and that goes for both the FE cards and custom, third-party cards too. But why launch a card that has next to no stock? Well this, for me, is where it gets interesting.

If you've been following our mini-series on picking your custom PC parts, you may remember we mentioned that AMD will also be releasing new GPUs later this year (sometime around late October, early November). These same GPUs will be based on the ones going into the new-gen consoles which, if you've been following the leaks and announcements, you'll know are due to have some serious graphics power inside. You may have also seen recently that both the Xbox Series X and PS5 are both rocking up on the shelves at sub $500...

Now, I've no doubt Microsoft and Sony are potentially making a loss of some kind here, and there were likely discounts to be had too, but this certainly could suggest that the AMD competition this year might be fierce in the PC market. It would also explain the limited stock from NVIDIA; my best, educated guess is that NVIDIA knows something we don't, or else has made a panic move to sell as many of these undeniably awesome cards before AMD gets to market. This would not only explain the limited stock, but also the over-compensation in hyping up the RTX 3080 in advance of its launch.

Well, there's a couple of answers to this question, and fortunately, I think they're fairly straightforward. If you were already looking to upgrade sometime around the end of this year, and are in no hurry or dire need of a new PC right now, then it is almost certainly worth waiting for at least a few months. We're still yet to see the RTX 3090, 3070 and 3060 cards from NVIDIA, as well as the new GPUs on the horizon from AMD. Those at least are certainly on their way. But there's also been rumours and leaks surrounding potential Super/Ti variants of these new 30 series cards too, which seem set to offer increased VRAM for crushing those higher resolutions and settings, which only further solidifies our theory on AMD's launch being pretty big...

But if you need to upgrade right now, or are sitting with a GTX 1080/1080Ti and are wondering which card to pick, you will not be disappointed with an RTX 3080 - if you can find one of course. Muddy marketing figures aside, these are ultimately solid graphics cards, and currently they're the fastest in the world in the gaming market.

And don't worry fellow 20 series owners, there's an answer for you too. It just comes down to what you have, how long you've had it, how limited you are by a budget, and what you want out of a graphics card too.

I'd say that anyone who's happy at 1080p and isn't looking for the absolute maximum possible frame rate known to man in CS:GO, is probably fine. You get to watch the mad grab from afar with the safety of knowing these cards will only get cheaper, or else become more readily available further down the line. In the same breath, I'd argue that those of you on a 20 series card anywhere from the 2070 Super to the 2080 Super, will also be able to do the same, provided you're content with 1440p high-settings. But if you're thinking of moving to stable frames at 4K native, or 1440p high-refresh, then a 3080 might well be for you. And if you're the lucky soul with a 2080Ti in your system, just remember it is only 30% slower at 4K, and 20% slower at 1440p compared to that 3080. It is still an absolute beast. It still chews through frames no problem. Don't let buyer's remorse get in the way of what still is an exceptional gaming experience.

What are your thoughts on the new RTX 3080? Were you happy with the benchmarks? Disappointed? Can't wait until they're back in stock? Let us know down in the comments!