Yesterday was just another Thursday, until, in an event as exciting and bemusing as the latest Death Stranding trailer, NVIDIA announced its shiny new Titan graphics card at the Neural Information Processing Systems 2017 conference in a surprise launch. Introducing: The Titan V, a powerful new addition to their hardware range that has been built with the focus on AI and deep learning. It’s Titanic. It’s as shiny as a rapper’s necklace. It's $3,000.

Earlier this year, NVIDIA targeted the supercomputer and high-performance computing markets with the launch of the Tesla V100, a massive card with huge workload performance capabilities that was far more powerful than anything NVIDIA had tackled before. It was priced at $10,000.

Now with the Titan V, NVIDIA seems to be tackling a more approachable consumer. Yes, the average gamer may not be prepared to fork out $3,000, but the Titan V is now NVIDIA’s top prosumer card. Containing GV100 architecture in a more familiar GPU, the Titan V is a more defined compute that benefits from the unique features of a GV1000 GPU. As NVIDIA slimmed down their Titan XP into the GTX 1080 Ti, the Titan V has the specs of being the skimmed milk to the whole-milk Tesla V100.

The GPU has three 3072-bit memory paths and offers 12GB of HBM2. Its memory clocks in at a transfer rate of 1.7 Gbps. Even ignoring that it is wielding deep learning Tensor cores, this release is a triumphant form of engineering. The Titan V is, pardon the pun, a titan of the prosumer market. It’s the highest performing graphics chip that NVIDIA has released to date in that market. 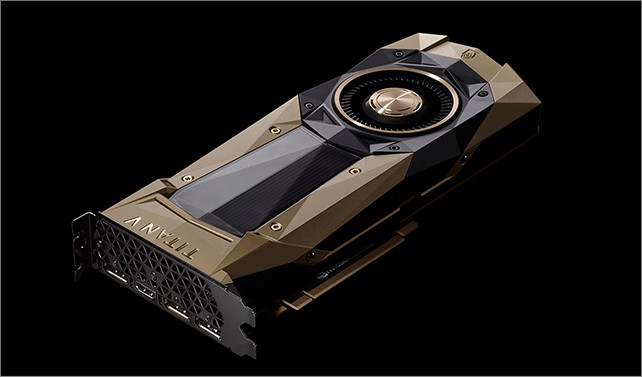 It’s worth noting that NVIDIA is selling this as a definitive workstation-grade AI computer card. It’s not a mistake that they announced the card formally at a neural networking conference. They know which audience they are targeting. Now they are giving these users a cheaper option, with the same unprecedented power that their brand proudly creates.

NVIDIA is aiming to target the Titan V to researchers who may not have the facilities for a high-performance computing installation. Although the price tag is still $3,000, it is substantially cheaper than the Tesla V100 and impressively powerful for various industries.

The Titan V was released yesterday and has been limited to two per customer. For now...