This is the next saga in my irregular series of household fixes that solve little technology problems around the home.  (See here for how the Sumvision Cyclone box saved the day in a previous post). My latest predicament that needed solving features a tidy bit of technology to improve feeble wifi.

The last time I was visiting the mother-in-law down in Somerset, I was settling down in her bungalow for my usual Sunday indulgence of seven hours of uninterrupted American Football with NFL Redzone. For those who aren’t aware what NFL Redzone is, it’s just non-stop coverage of all the NFL games similar to Soccer Saturday but much better. Stick with me…

At some points during the show, they go to something called “Quadbox” where they show four different games at once and the idea is that you tweet them with a photo and the #quadboxsighting hashtag, you can win NFL gear.

I’m watching and then all of a sudden what happens? IT’S QUADBOX TIME. Hurry, Hurry… 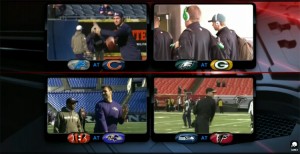 So I load up Twitter on my phone, but it doesn’t connect. Because of her rural cottage with its gargantuan, ancient walls, the wireless signal doesn’t reach from her kitchen into the living room and of course, out that way there’s no 3G either.  Great. How am I ever going to win that sweet NFL apparel :(?  I really need a solution for this, we’re visiting again in a few weeks and I’d like to be in it to win it.

When I get back to the office on the Monday I spoke to our networking product manager and he suggests this lovely little device from TP-Link: a Wireless Range Extender. All I need to do is let it pair with her router (instructions included – really easy), plug it in to a power socket elsewhere in the house and the signal then bounces off of it and extends it further (of course).  So I go through the set-up, in a flash, plug it in the hallway bridging the gap between the kitchen and living room and I’m connected, ready to hash tag away. 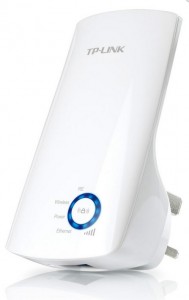 Sometimes if you’re wireless strength is really low you might tend to think that buying a new router or upgrading your Internet speed is needed, but this little device could be what you need for a lot less money.  Whether it’s used at home, the office or even in the classroom it could be the answer to get every room covered with Internet goodness.

I really like this product as a good house/office essential piece of networking, it’s really easy to set up (the mother in law hasn’t managed to break it yet either) and it’s not a big piece of kit so it can easily blend in and not look out of place in a wall socket.

To view the full features, spec and price of the Range Extender click here.