Why not view one of these similar products in stock and ready to buy?
or view our entire range of AMD Ryzen1000 Series Socket AM4 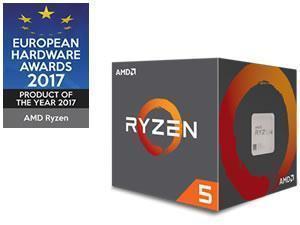 The silicon is lithographed in the advanced 14 nm FinFET manufacturing process with stacked transistors (also known as 3D transistors). This striking reduction in scale has resulted in space being freed up on the processor die, thereby permitting the integration of a total of 3 MB Level 2 Cache and a full 16 MB Level 3 Cache into the centrepiece of the PC. Due to the intelligently controlled cache buffer and thanks to the "Smart Prefetch" jump-prediction algorithms, Ryzen is capable of ensuring instantaneous data access and swift compute performance in all use cases - irrespective of whether the task involves gaming and Virtual Reality or cloud computing and virtualisation.

Note: This is the boxed version including an AMD Wraith Spire CPU cooler. All AMD Ryzen CPUs also require an AM4-compatible motherboard.