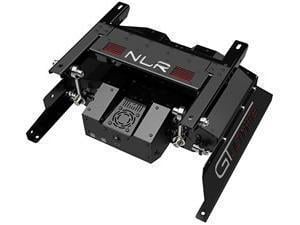 The Next Level Racing® Motion Platform V3 is designed and engineered to be the most advanced professional consumer platform on the market and based on feedback we are certain it can outperform professional platforms far greater in price. The platform is a product forged from years of simulation expertise combined with world leading European motion and software engineers at MotionSystems®. The Next Level Racing® Motion Platforms are not only used by sim racers from around the world but also leading universities, military defence, training institutions and professional drivers/pilots.

The Next Level Racing® Motion Platform is designed and engineered specifically just for the seat to move to give the most realistic immersion with the mind and body. With this design and engineering it’s tested and proven to feel the g-forces more effectively through muscle pressures that you wouldn’t feel if the wheel and pedals moved at the same time. This pressure applied to your body and muscles can more realistically replicate and sustain the same g-forces as a real car. This method of only the seat moving is not only used by professional race car drivers for training but also on some of the world’s most advanced and high end motion simulators including CXC Simulations.

Leading Features of the Next Level Racing® Motion Platform V3

- European made, professional platform designed in collaboration with world leading commercial motion engineers
- Specially designed for just the seat to move as common world’s most advanced and high end motion simulators including CXC Simulations
- Incredibly fast, yet smooth realistic movements using professional motion cueing profiles and software engine
- The most compact design in the world yet it’s incredibly powerful - it can fit within the space of your existing cockpit without any additional space required
- Can support up to 130 kg or 285 lb users
- Simple to use with dedicated click and play Next Level Racing® Platform Manager Software compatible with all major racing and flight titles on PC with simple USB plug in
- VR Headway technology built into the Platform Manager Software
- Passive and active cooling method with adaptive fan speed control to ensure the platform can even be used for more demanding purposes such as commercial centres and events whilst not overheating
- Electromagnetic motor shaft brakes ensures zero movement of the platform when the system is switched off.
- Built in power source, including an active PFC function to protect from short circuit/overload/overvoltage and overheating.
- Acoustical panels inside to reduce noise of operation even lower than the V1 and V2 which were both known for being quietest platforms on the market
- Quality European Manufacturing and backed with a 2 year warranty
- Max Angular Displacement for Pitch & Roll : +- 10°
- Max Speed : 20°/s, Max Acceleration : 360°/s2

The Next Level Racing® Motion Platform combined with VR is simply an incredible experience, some of our favourite titles with include Project Cars, Assetto Corsa, Dirt Rally and iracing. For VR companies developing their own software SDK is available at an extra cost. Our SDK allows 3rd party software integration and adding motion for customised VR projects. For more info please contact us. The Next Level Racing® Motion Platform is robust product that is also suitable for commercial use and we provide 1 year warranty for commercial customers.

Other by dedicated plug-ins (connector):

- Many games that use DirectInput interface (and optionally ForceFeedback interface) to interact with joystick or steering wheel.