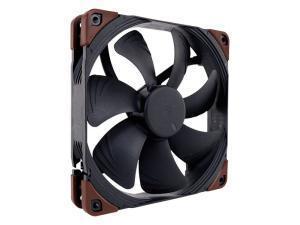 Conceived for industrial heavy-duty applications that require enhanced cooling performance and advanced ingress protection, the NF-A14 industrialPPC (Protected Performance Cooling) is a ruggedised high-speed version of the award-winning retail model. The 24V Q100 variant uses Noctua’s AEC-Q100 qualified wide input range NE-FD4 motor driver IC in order to support 24V-based industrial and automotive applications. Its sophisticated inrush current suppression and extreme electrical robustness with extended burst and surge immunity allow it to operate safely in sensitive or hostile electronic environments. Thanks to the outstanding aerodynamic efficiency of the NF-A14 design and the use of a novel three-phase motor, the industrialPPC version provides superior airflow and pressure capacity while keeping noise and power consumption at a moderate level as against comparable high-speed fans. While its fibre-glass reinforced polyamide construction and certified water and dust protection make the NF-A14 industrialPPC suitable for operation in challenging surroundings, the renowned SSO2 bearing technology guarantees an MTBF of over 150,000hrs. Topped off with Noctua’s trusted reliability and 6-year manufacturer’s warranty, the NF-A14 industrialPPC is an ideal choice for highly demanding applications that require superior flow rates and ultimate dependability.

Award-winning NF-A14 design
Having received more than 100 awards and recommendations from the international press, Noctua's NF-A14 has become a proven premium choice for 140mm cooling needs. Its renowned efficiency has convinced tens of thousands of customers all over the world.

High electrical robustness
Meeting the AEC-Q100 standard’s stringent requirements for burst and surge protection, the 24V Q100 version’s high electrical robustness permits the fan to be used not only in automotive projects but also in other harsh environments with transients from electric motors and other inductive switching loads.