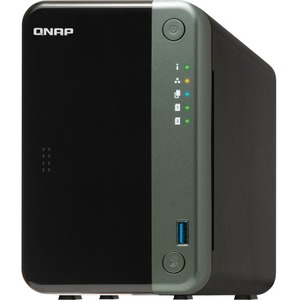 PCIe expansion allows for a Multi-Gig 10GbE or 5GbE network card, or a QM2 card to add M.2 NVMe or SATA SSDs for caching.

Upgrade your NAS to 2.5GbE networks

The TS-253D comes with two 2.5GbE RJ45 LAN ports that allow you to use existing CAT5e cables to upgrade network speeds from 1 Gigabit to 2.5 Gigabit. The dual 2.5GbE ports also support Port Trunking for up to 5 Gbps! By using QNAP's N-BASET/Multi-Gig USB 3.2 Gen 1 to 5GbE adapter (Model name QNA-UC5G1T) or 5GbE PCIe expansion card (Model name QXG-5G1T-111C), your laptop or desktop computer can easily connect to 2.5GbE networks with the TS-253D to benefit from higher network speeds.

Satisfies bandwidth-demanding applications such as virtual machines and containers.

Mount an iSCSI LUN from the TS-253D to your computer to store your vast game collections.

Transform your network with a wallet-friendly 2.5GbE switch

Upgrading your network shouldn't break the bank, and 2.5GbE connectivity provides immediately noticeable improvements compared to standard 1GbE. The QSW-1105-5T is an unmanaged switch with five 2.5GbE ports (backwards compatible with 1G/100M) and supports CAT5e cables to connect multiple computers and NAS. The QSW-1105-5T is energy-saving, low-noise, plug-and-use, and supports loop detection and blocking to provide a simple and effective high-speed network environment.

The TS-253D is powered by an Intel® Celeron® J4125 quad-core 2.0 GHz processor (bursts up to 2.7 GHz), features up to 8 GB DDR4 memory, and supports SATA 6 Gb/s drives. The support of Intel® AES-NI encryption engine boosts encryption performance while also maintaining the security of your NAS data. You can flexibly install SSDs for cache acceleration to maximize network and storage performance for data-intensive applications. 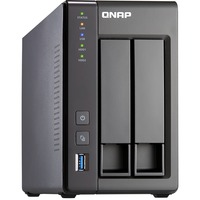