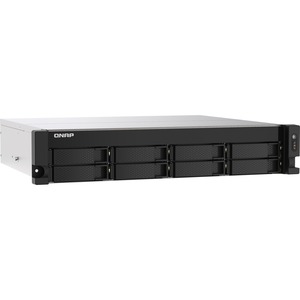 With its powerful AMD Ryzen™ V1000 series V1500B Quad-core processor, the TS-873AU-RP is capable of boosting virtual machine performance with up to 4 cores/8 threads at 2.2GHz. The TS-873AU-RP includes two 2.5GbE ports and a PCIe Gen 3 slot, providing you with fast network connectivity and the ability to add extra functionality and additional application potential. The TS-873AU-RP also features a redundant power supply to ensure maximum system uptime. Cutting-edge hardware integrated with comprehensive software solutions makes the TS-873AU-RP the preeminent choice to tackle resource-demanding applications and tasks.

Absolute performance with AMD Ryzen™ and up to 32GB RAM

The iSCSI Extensions for RDMA (iSER) protocol boosts the data transfer performance of VMware® ESXi storage and reduces the CPU load of the ESXi server. iSER support can be added to the TS-873AU-RP by installing a QNAP QXG-10G2SF-CX4 10GbE PCIe card, which uses the Mellanox® ConnectX-4 controller. iSER can provide a significant increase in performance, providing an essential tool to optimize demanding virtualization applications.

Regardless of your virtualization needs, you can count on Virtualization Station and Container Station for complete virtualization support. Use the Network & Virtual Switch app to allocate adequate physical network resources to virtual machines, containers, and the TS-873AU-RP to simplify network deployment.