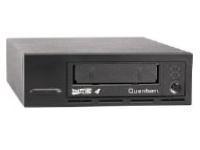 Quantum's LTO-4 HH tape drive is a half-height tape drive that offers the same performance and reliability as competitors’ full-height LTO-4 tape drives. At the same time, Quantum’s LTO-4 HH is the smart choice for those looking to reduce power consumption and cooling costs in the data center because it uses up to 46% less power when idle than the competition and up to 26% less power in stand-by mode . In addition, it uses less power when reading and writing than LTO-3, while being 50% faster. The drive has a native transfer rate of 120 MB/sec and native capacity of up to 800GB. Its simple space saving half-height form factor uses the latest industry standard interface -- Serial Attached SCSI (SAS)-- to allow for easy installation and integration into your datacenter, while providing the same performance as competitors’ full-height LTO-4 drives. Quantum’s LTO-4 HH tape drives also protect your investment by providing backward read and write compatibility with LTO-3 media and backward read compatibility with LTO-2 media. And with Quantum’s LTO-4 HH drives, security is now at its highest level as drives feature AES 256-bit data encryption. Encryption on LTO-4HH tape drives is hardware based, allowing for the highest level of security without any loss of performance during the encryption process. In addition, LTO-4 HH is WORM capable when used with LTO WORM data cartridges. All with Quantum’s exclusive reliability features including:

- SmartVerify virtually eliminates the need for a traditional verify pass during backup, reducing the backup window and increasing data integrity
- FastSense monitors the speed of incoming data and matches the speed at which the drive streams data more effectively than the competitors’ LTO drives.

FastSense variable speed matching for Quantum’s LTO-4 HH drive is better than competitor’s full-height or half-height drives in a number of ways:

Competitive drives can waste time and power by: