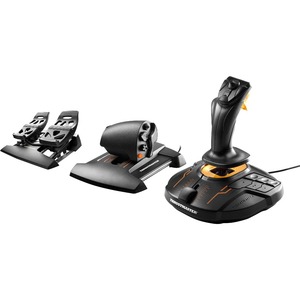 The complete solution for Simmers: control of all cockpit elements.

Thrustmaster has devoted its 25 years of expertise in flight sim controllers to meet the growing demand from flight simmers in general - and space simmers in particular.
The T.16000M FCS FLIGHT PACK has been designed for advanced fliers looking for comprehensive, realistic controls as an alternative to using a mouse and keyboard.
It is composed of the T.16000M FCS (Flight Control System) flight stick, the TWCS (Thrustmaster Weapon Control System) throttle and the TFRP (Thrustmaster Flight Rudder Pedals). The T.16000M FCS FLIGHT PACK is compatible with PC via USB in Windows 10, 8, 7 and Vista (32-bit and 64-bit).

To give simmers complete control; the TWCS throttle includes 14 buttons and one 8-way-PoV hat switch that are added to those of the joystick. In total, this provides gamers with 5 axes, 30 buttons and two 8-way PoVs - plus 3 extra axes via the optional TFRP rudder.