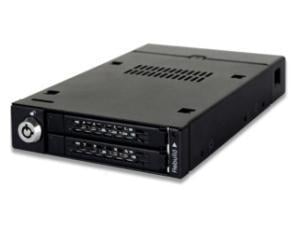 Every year, technology is becoming more and more advanced and is constantly improving. These improvements includes improve enhanced functions in smaller and smaller packages. This is why 2.5” solid state drives and hard drives are becoming more popular due to its low power consumption and space-saving benefits, which are superior to 3.5” SATA hard drives in almost every category. Combine with the extra bandwidth of the SSDs and the raw power of the processors; enterprises are able to accelerate their project-development process. Since 2.5” SSDs and HDDs have smaller storage capacities compared to 3.5” hard drives, maximizing the storage density in limited spaces have become the most important task for many storage consulting firms; a task they are faced with often. The ToughArmor MB992SKR-B is designed specifically for systems with space limitations by fitting 2 x 2.5” SSD / HDD into a single 3.5” external bay. With its built-in high performance hardware RAID processor, the MB992SKR-B gives users the option to choose between RAID 0, RAID 1, BIG and JBOD modes. The built-in RAID function allows you effortlessly add a 2.5” SSD/HDD RAID array to any system without needing to add a RAID controller card. The MB992SKR features a heavy duty full metal construction which is commercially suitable for medical & military systems, government agencies, Industrial PCs, SMB workstations, VM workstations, mobile DVR systems, aerospace computers, automation systems and embedded systems

The ToughArmor MB992SKR-B is a self contained hardware RAID enclosure that gives you the flexibility to choose between RAID 0, RAID 1, BIG and JBOD modes. With a built-in high performance RAID chipset, the enclosure operates independently of your system with its own processor and memory to run the RAID applications, offering the best reliability compared to software RAID. Software RAID can be infected by viruses and can cause the RAID table to be damaged, resulting into lost data

With a standalone RAID function you can add 2.5” SSD/HDD RAID array into any system via a single SATA connection without the need for an additional RAID controller card. That being said, with the MB992SKR-B you can quickly create a RAID 1 array for your OS / VM setup to prevent a downed system caused by drive failure, or create a RAID 0 array for faster transfer speed for performance intense applications. The JBOD mode allows you to see two individual drives (requires SATA port-multiple on the host end), and the BIG mode provides maximum storage capacity into a single point, by combining 2 hard drives storage sizes into a single large storage device. With options like these to maximize uses for your hard drives, the choice is yours

Utilizing its small form factor, The MB992SKR-B is perfect for use in system that has limited available space such as IPC, mobile DVR system, aerospace computer, automation system or embedded system. The ability to house 2 x SATA SSD or HDD in a single 3.5” external bay with built-in RAID function makes it a valuable asset, such as using RAID 1 protection for mobile DVR system or fast RAID 0 arrays for powerful gaming computer. To keep cables from cluttering, a single SATA 15 power pin is used to ease installation and only requires one SATA port to operate. Save as much space while maintaining the storage capacity and performance, with the compact MB992SKR-B

Making sure your drives are in good hands and lasting as long as possible is carefully considered to any enterprise build and design. The MB992SKR-B is capable of holding up in the harshest environments, with the heavy duty metal construction in the entirety of the body and its smaller components. It can be used various systems including: military and law enforcement deployment, as well as manufacturing conditions such as embedded control systems and factory automation systems. With the full metal design, the ToughArmor is perfect for industrial and medical devices that may require a flammability rating

The metal material used allows effective heat dissipation transfer from the hard drives to the mobile rack. By conduction, the heat will dissipate more quickly with greater surface area. On top of that, Multi-Flow Technology (MFT) effectively routes air flow correctly for excellent passive cooling, via ventilation slots on the front, rear, top and bottom (in multiple locations). Lastly, Anti-Vibration Technology (AVT) and EMI Grounding are used to provide a stable environment, allowing the hard drives or SSD’s used to perform at its best

The easy to read front LED indicators will indicate when a drive is ejected (no light), accessed (green), or has failed (red). When the unit is in the process of rebuilding the RAID table in RAID 1 mode, an individual rebuilding indicator light in the front will display. Active Power Technology (APT) allows each drive LED to be on only when a hard drive is inserted into the enclosure. For drive security, the eagle-hook lock system on the tray makes sure your hard drives will not eject when not needed. Additionally, the 2 segment key lock provides extra protection to any physical theft of the hard drives, securing from any open and grab

To access your data outside of your system or in a remote location, ToughArmor MB991U3-1SB is the way to go about. The drive tray slot of MB991U3-1SB is compatible with a variety of ToughArmor drive trays including the ToughArmor MB991, MB992, MB994, MB996 and MB998 series. This allows existing ToughArmor users to access their internal drive externally without opening up the case. It is a great tool for an individual drive diagnostic test. If you need to do a safe data erase or just simply expending system storage capacity, just remove the tray from the internal ToughArmor unit and insert it in the MB991U3-1SB to perform individual tasks externally with USB 3.0 interface. Best of all, the MB991U3-1SB uses USB bus-powered and it does not require a power adapter to operate. Simply connect the USB cable to any system and you are ready to go 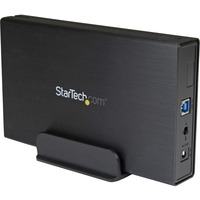