Why not view one of these similar products in stock and ready to buy?
or view our entire range of GPU Blocks 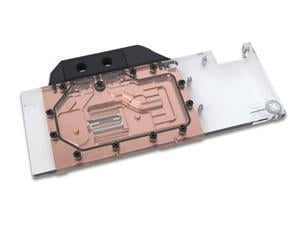 The base of the block is made of electrolytic copper while the top is made of quality acrylic material. The top also features two pre-drilled slots for 3mm LED diodes. The sealing is ensured by quality rubber washers. Screw-in brass standoffs are pre-installed and allow for safe, painless installation procedure. EKWB recommends the purchase of aesthetic retention backplate which improves the looks of your graphics cards and also provides some passive cooling to the circuit board VRM section.

EK also encloses a single-slot I/O bracket which replaces the original two-slot in order to make installation of multiple graphics cards easier and also transforms the GPU into a gorgeous single slot solution.

The block also features a special plastic cover over the block Terminal. This add-on is designed to reveal the Radeon logo, visible from the side. The terminal cover is removable, it is fitted with 2 screws from the side.

G1/4" threaded fittings can be used on both sides of the FC terminal. Up to four EK-FC Radeon water blocks can be used on a single ATX form factor motherboard by using EK-FC Terminal (DUAL, TRIPLE or QUAD type) system or other means of interconnectivity.

Made in Slovenia - Europe!