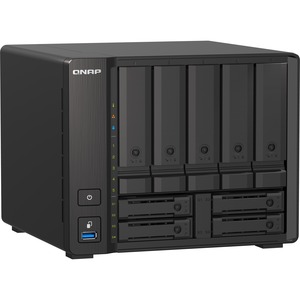 Absolute performance with AMD Ryzen™ and up to 32 GB RAM

Powered by an AMD Ryzen™ Embedded V1000 series V1500B 4-core/8-thread, 2.2 GHz processor with up to 32GB DDR4 RAM, the TS-h973AX delivers aggressive yet power-smart performance for compute-demanding applications. AES-NI encryption support boosts encryption performance while also maintaining the security of your NAS data. SSDs can be flexibly installed for cache acceleration to maximize network and storage performance for data-intensive applications.