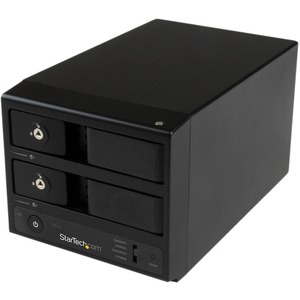 For fast performance and efficient data transfers, the enclosure supports SATA III transfer speeds -- up to 6 Gbpswhen connected through eSATA. The versatile RAID enclosure can also be connected through USB 3.0, with support for UASP, performing up to 70% faster than conventional USB 3.0 when paired with a UASP-enabled host controller. See our UASP testing results below for further details.

For fast and easy drive installation and removal, the dual drive enclosure features a convenient trayless system that eliminates having to mount and fasten your drives, saving time and hassle.

The S352BU33RER is backed by a StarTech.com 2-year warranty and free lifetime technical support.

UASP is supported in Windows 8, Mac OSX (10.8 or above), and Linux. In testing, UASP performs with a 70% faster read speed and 40% faster write speed over traditional USB 3.0 at peak performance.

At the same peak in testing UASP also shows an 80% reduction in required processor resources.