KEY FEATURES
Thrust reverser function for total realism
Ergonomic replica of the Airbus throttle quadrant
Thrust levels can be adapted to any style of aviation
Adjust resistance according to your preference
Plug and play
Compatible with T.A.R.G.E.T. software
Compatible with PC

ICONIC AIRBUS CONTROLS
The TCA Quadrant Airbus Edition features 8 ergonomic physical action buttons (plus 8 virtual buttons on the thrust levers, for a total of 16), which are replicas of Airbus airliner controls (A320neo type).

Feel realistic sensations when using the throttle quadrant’s buttons, detents and other controls — just like a real aircraft captain.

For even more realistic use with four-engine aircraft (Airbus A380 type), two throttle quadrants can be linked together (additional throttle quadrant sold separately), giving you access to four thrust levers instead of two!

PILOT ANY TYPE OF AIRCRAFT
The stepped mode is inspired by its counterpart found on Airbus airliners, with iconic detents.

Mechanical selectors let you disable the detents and thrust reversers (to switch to linear axis mode), for flexible piloting of any type of aircraft. 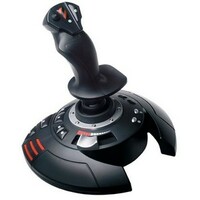